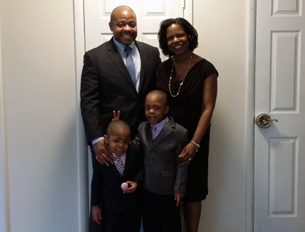 It’s Friday afternoon and 6-year-old Maxwell runs into the house after school. He can’t wait to tell his dad that he was “thumbs upâ€ all week. That means he demonstrated excellent behavior at school. So at home, this means he gets a “ticket.â€

Maxwell’s dad, Alan Bivens, gathers Maxwell and the rest of the family – his other son Jackson, who is three, and his wife Kimberley – into the living room where a large poster board hangs on the wall. They go over Maxwell’s achievements, then present him with a “Thumbs Up Weekâ€ ticket. Beaming with pride, Maxwell places the ticket on the board next to the other ones he has accumulated over time. “Just six more!â€ he exclaims. Maxwell has 14 tickets. Once he reaches his goal of 20 tickets, he will have earned his prize: a new Optimus Prime toy.

Alan and Kimberley Bivens created this ticket system when Maxwell was four years old. “The system is set up to get him started with a few important habits: goal setting, saving, personal responsibility, and accountability,â€ Alan explains.

They start by working with Maxwell to set a goal for something he wants, then establish how many tickets it is worth. There are various ways Maxwell can earn tickets. “We have a communication with his teachers. If they give him a “thumbs upâ€ for good behavior for the entire week, he earns one ticket. Sometimes the teacher or I will give him a ticket for going above and beyond a task he has been asked to do or when he helps others. One time, his teacher felt the need to call Kimberley at work to tell her about Maxwell’s extraordinary achievements that day. We celebrated with a reward of five tickets.â€

For 3-year-old Jackson, Alan has simplified the idea but is laying the same foundation of principles. “He doesn’t have the patience for such a process yet, but we’re working toward it,” says Alan. “Right now, he’s rewarded in smaller, more frequent ways for his “thumbs upâ€ days.â€ Those rewards include special dinners, a chance to pick a movie, “and his favorite – a call to grandma and aunties to tell them about him receiving a thumbs up that day.â€

Alan says the child needs to be old enough to have the patience for a complex reward structure, and suggests age four or five as a good time to start implementing a system like this. As the Bivens boys mature, Alan will start teaching everyday skills like balancing a checkbook to long-term planning for retirement. But at this point there’s no monetary value attached to the tickets. The current objective is just to establish three main principles:

Alan says his ticket system teaches Maxwell and Jackson that they can set any goal with hard work, patience, and a plan. “Effective goal setting forces you to really think about where you want to go. Only then can you create an action plan.â€Â  He says this directly relates to financial literacy because many of the goals we set in life require a financial investment. “A 6-year-old’s attention is drawn to all types of stimuli, which he could use his limited financial resources to get. Having a goal and seeing how he must – and can – save to get it will begin his journey into understanding delayed gratification.â€

Books All Young Entrepreneurs Should Read