Painting With a Twist Franchise Owners Succeeding in Houston, Texas 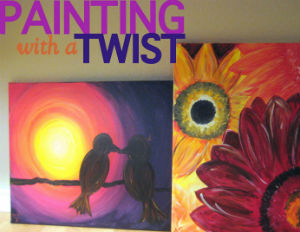 Kermie and Algy Irvin Jr. own two Painting with a Twist enterprises in the Greater Houston area. Their businesses are part of a trend toward “lifestyle franchises,” a segment in which both franchised and independent ventures cover leisure pursuits such as jewelry-making and beer brewing. The Irvins have found their niche by helping people unwind with a “paint and sip” franchise that hosts events where people can literally paint while they drink.

The couple purchased their first Painting with a Twist franchise in December 2009 in The Woodlands, Texas, and their second in 2012 in Kingwood.

Painting with a Twist is, headquartered in Mandeville, Louisiana and currently boasts more than 125 franchises in 23 states throughout the United States. With a presence in nearly half the nation, Painting with a Twist is now claiming new territory by offering franchising opportunities in four states: Arizona, California, Virginia, and Massachusetts.

Founded in 2007 by Cathy Deano and Renee Maloney, Painting with a Twist began franchising in 2009 providing customers with paint, a canvas, and brushes. The concept pairs instructional art with friends, wine or soft drinks, snacks, and a lively instructor to produce individual works of art. Customers pay $35 for a two-hour class or $45 for a three-hour stint at the easel, surrounded by fellow art lovers as they sip glasses of vino and produce paintings.

There’s nothing quite like a natural disaster to make you rethink your life and work. That what happened in 2005 when Kermie, 42, was working as an engineer in the maritime industry, and Algy, 43, was employed in the oil industry and as a commercial photographer. The Irvins lived in New Orleans when Hurricane Katrina ripped through the city that year.

That was a turning point for the couple, who relocated to Houston the following year. As part of their rebirth, the couple decided to become business owners, investing $80,000 of their own funds to open their first Painting with a Twist location.

Their initial cash outlay covered the building lease and franchise fees, the latter of which includes all equipment, supplies, artist training, studio setup, and “a few months of buffer until the studio was self-supporting,” says Kermie.

The turnkey investment to become a Painting with a Twist franchise is approximately $100,000. Franchise partners have access to comprehensive and ongoing training from a Home Office support staff of 16 professionals, as well as access to the company’s industry-leading library of more than 4,000 copyrighted and original paintings.

Painting with a Twist is the largest and fastest-growing paint and sip franchise in the country. The company, which was recently ranked the No. 1 Paint and Sip franchise, along with the Top New Franchise and the Best of the Best in 2014 by Entrepreneur Magazine, plans to open 68 studios in 2014 and has experienced 23 percent same-studio sales growth year-over-year.

The Irvins rank among the top grossing Painting with a Twist operators. Franchisees in the top one-third of the company earn about $302,000 in gross annual revenue.

Part of the Houston couple’s marketing efforts have involved fundraising activities with local schools, running silent art auctions, and providing support services for two of the area’s largest art festivals. Their community involvement led to lucrative corporate deals. In 2010, for example, clients like ExxonMobil and Marriott’s Woodlands Waterway Hotel and Convention Center began sending groups of employees to Painting with a Twist to participate in team-building activities.

“We believed in the concept and we knew that once we educated people about it and they understood it, it would catch on,” says Algy.

Over the next two years the couple plans to open a third location and use social media and Internet radio to promote the business and increase consumer awareness.

“I have always had a passion for the arts and the desire to improve the quality of life of the people that I work with,”adds Algy. “Painting with a Twist provides the ultimate avenue to fulfill both.”

How To Blow The Whistle On A Tax Cheat