The Other Achievement Gap 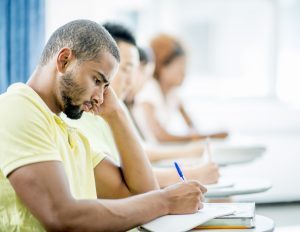 Women are now graduating with more degrees than men in nearly every racial group. According to the National Center for Educational Statistics as reported by EdSource.org, in 2014, nearly 56% of undergraduates were women; only 44% were men.

An article at EdSource says, “Among people between ages 18 and 24, theÂ center’s survey shows imbalancesÂ within ethnic groups: among African Americans, 28% of men and 37% of women were enrolled in college; among Latinos, 30% of men and 39% of women; and among whites, 40% of men and 44% of women.â€

This is a serious problem with wide-ranging implications for society, and it’s most acute for African Americans. The EdSource article discusses the phenomenon in detail. Here’s an excerpt.

A persistent gender gap is troubling manyÂ community and school-based programsÂ inÂ California that seek to move low-income, first-generation and African American and LatinoÂ high school students onto a path to college.

Many more young women than young men are taking advantage of the assistance available for test preparation, college applications, and financial aid, program administrators and counselors report. Young women often comprise at least 60% of the participants.

That gender disparity has led to an intensified effort by college readiness programs across the state to recruit more boys and young men–particularlyÂ African Americans and Latinos. But officials say change won’t be easy.

Overall, the goal is to make college preparation more appealing to male high school students. In some cases, that means setting up after-school and weekend classes or discussion groups solely for young men, lowering the grade point averages boys need to receive some privately fundedÂ scholarships to attend college, and trying to schedule SAT prep and other events to not conflict with sports teams practices and games.

The male-female disparity is “tough to crack,â€ said Stephanie Campbell, executive director ofÂ Bright Prospect, a college readiness program in Pomona, where two-thirds of participants are girls. Among steps to boost male enrollment, her organization is hiring more young men as staffers and building relationships with high school coaches so they excuse athletes from some practices to work on college applications.

Experts attribute that gapÂ to social, school-related, and economic causes. To start with, young African American and Latino men show higher dropout rates during high school than young women. In some cases, the timing of programs conflicts with high school sports and after-school jobs. And some young men perceive college readiness efforts as “nerdy,â€ participants say.