Oprah Gives Your Drama with Greenleaf 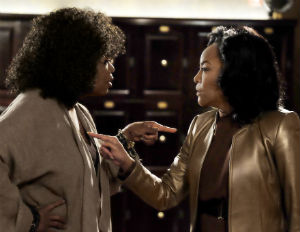 Premiering on Tuesday, June 21 at 10 p.m. ET/PT and Wednesday, June 22 at 10 p.m. ET/PT on OWN, Greenleaf, takes viewers into the unscrupulous world of the Greenleaf family and their sprawling Memphis megachurch, where scandalous secrets and lies are as numerous as the faithful. Born of the church, the Greenleaf family love and care for each other, but beneath the surface lays den of iniquity–greed, adultery, sibling rivalry, and conflicting values–that threatens to tear apart the very core of the faith that holds them together.

In executive producing Greenleaf for the OWN Network, Winfrey set out to create something authentic, and relatable. “What I really am most interested in creating are stories featuring people of diversity, particularly people of color–black people of color, that allow us to be real,â€ Winfrey states. I think the way you break down barriers in a society that doesn’t fully see you as human, is to show your humanness and to show your humanity,â€ she continued.

Former minister and creator of the series, Craig Wright, spoke on what drew him to create the layered family drama centered around a megachurch. “I think a lot of what made this project appealing to me is we got to come up with a show about people whose faith is real. The doesn’t treat the faith with satire, it treats it with respect,â€ says Wright. “That doesn’t mean the show can’t have meaty turns and juicy, silky stuff in it. But it takes the faith of the people really seriously and I think, in a weird way, doing a show about a black church actually made that possible, that the religion gets to be taken seriously.â€

To experience a taste of the drama that’s to come, check out the trailer.

Black Students Out-Voted Their Peers in 2012. Will They Do It Again?