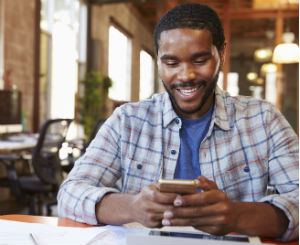 Want to avoid getting trapped in student loan debt? Apply for scholarships. Yes, you may stillÂ needÂ to write essays to qualify, but with Scholly you no longer haveÂ to search for hours on the Internet.

Using Scholly, a mobile and Web app, the scholarship search is easier now than it’s ever been–and it’s making a huge difference in the lives of students.

“We have lots of stories from students,â€ says Christopher Gray, co-founder and CEO of Scholly, “who have won $20,000 to enroll in school, or got money to pay for their senior year or for law school or nursing school.â€

“The hardest part about getting money for college is finding it,â€ Gray says in this video. Gray himself raised more than $1.3 million in scholarship money to finance his education at Drexel University. But the process pre-Scholly was tedious and painstaking. He then tried to help others do what he had done, and realized there had to be a better way.

“There’s all this money on one side of the market looking for students, and students were looking for the money–and they were having difficulty finding each other. So I found a way to leverage technology to make the process easier,â€ Gray says.

Scholly matches students to the scholarships they qualify for. It also sends push notifications when deadlines loom and when other scholarships become available. The app costs $2.99.

In addition to Gray’sÂ historic appearance and deal on Shark Tank, Scholly has been endorsed by celebrities such as Magic Johnson. Ty Stikorious, the manager of John Legend and Alicia Keys, is anÂ adviser on Scholly’s board. Gray has also been named to Oprah Winfrey’s SuperSoul 100 list, where it’s noted that cities like Memphis and Philadelphia along with the state of Montana have purchased Scholly for their students. The White House initiative My Brother’s Keeper has also partnered with Scholly “to provide the app to 275,000 students across America each year.â€

What’s next for Scholly? “We want to be a marketplace for students to discover things they wouldn’t otherwise know about,â€ Gray says. “For example, there are fee waivers to colleges, opportunities for SAT prep that’s free, and other opportunities.â€

For businesses interested in giving back to their communities, Scholly has a Gift Scholar program that businesses can use to sponsor student scholarships.