Omarosa Defends Return to The Apprentice After Fiance's Death 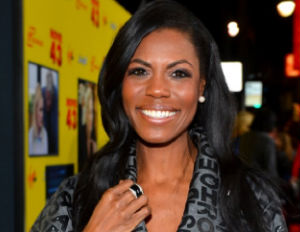 This round, Manigault is playing to win it all for her late fiancÃ©’s, Michael Clarke Duncan’s, favorite charity, The Sue Ducan’s Children Center.

On the newest episode of All-Star Celebrity Apprentice, “Trump pointed out that Omarosa’s new TV persona is a bit softer, and more vulnerable,â€ says theGrio.

The ferocious beauty recently sat down with theGrio’s Chris Whitherspoon to explain her revamped persona, letting people know winning is still important to her, but “not at all costs,â€ according theGrio. “What’s interesting is I pulled back, but my contestants are still competing against the Omarosa from season 1 of The Apprentice,â€ Manigault told Whitherspoon. “This season people are so afraid and intimidated by the persona that was Omarosa that they don’t even know how to deal with the new me.â€

While many seem to think Omarosa is trying to get the sympathy vote for Michael Clarke Duncan’s death, the reality star was ready shut all rumors down.

“What shocks me the most are my contestants who criticized and ridiculed me for coming back,â€ Omarosa said. “They said, ‘you shouldn’t be back, you shouldn’t be competing, you should be home grieving; you’re just here to exploit the charity,’ or ‘your going to win because people feel sorry for you’.â€