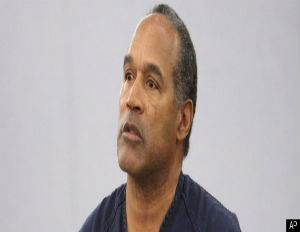 The State of California has just filed a new tax lien against fallen football star O.J. Simpson, according to TMZ.

Simpson is currently in a Nevada prison doing time for robbery.

This comes just weeks after a Nevada judge agreed to grant Simpson a hearing in May to determine ifÂ the former football star, who in 2007 took sports memorabilia from a hotel room at gunpoint that he claims had been stolen from him, was so badly represented by his lawyers that he should be freed from prison and get another trial.

Simpson wasÂ also charged with the 1994 murder of his ex-wife Nicole Brown Simpson and her friend Ronald Goldman, but was acquitted of those murders. However, Simpson still owes the Goldman and Brown families millions from a wrongful death lawsuit he lost.