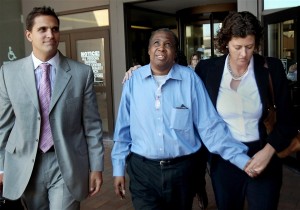 An Ohio African-American man who was cleared of murder after spending 13 years in prison was awarded a $13.2 million settlement, Fox News reports.

Ayers was a former security guard for the Cuyahoga Metropolitan Housing Authority, and was wrongly accused of killing, sexually assaulting and robbing elderly Dorothy Brown in her apartment in 1999. DNA evidence exonerated him.

“My goal is that it never happens to anyone else ever again,” Ayers told the Cleveland Plain Dealer.

First Lady Books Adele and Beyonce for her 50th Birthday