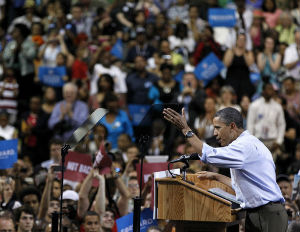 He gave his stump speech in the state that put him on the path to the presidency more than four years ago: Iowa. It’s the place where it all began, a historic journey that took him to 1600 Pennsylvania Avenue.

BLACK ENTERPRISE covered him there in November 2007. I remember driving a van from county to county, along with our Photo Editor Lonnie Major and then-News Editor Nicole Richardson. We saw how Obama energized young true believers and persuaded hardliners as he went from community centers to high schools, sharing his message and superstar aura with eager crowds. We spent some time with him before he gave a speech at high school. I asked the young, vibrant candidate what he viewed as the hardest part of the road to the White House. Without hesitatiion, he said “Being away from my wife and kids.” He then stressed during the 15-minute photo shoot for our January 2008 cover: “I’m running to change politics…”

As I watched his speech on TV last night to an audience of 20,000 “where our movement for change began,” it was a highly emotional moment. With First Lady Michelle Obama by his side and a voice made hoarse by marathon campaigning, he waxed nostalgic about his first campaign, how Iowans embraced him and set him on course with his first caucus victory. The win that his made his presidential prospects real to America – and African Americans. He also used the appearance to make the closing argument for the next four years, contrasting his record and leadership with that of his Republican Challenger Mitt Romney.

He reminded the audience of how his administrationÂ  revived an economy headed for this generation’s Great Depression, rescued a wrecked auto industry, pushed for equal pay for women, fought a contentious battle to pass landmark health care legislation, to name a few, as the nation’s chief executive. He then recounted pulling troops out of Iraq, signing nuclear arms reduction treaty with Russia, and tracking and killing Osama Bin Laden as Commander-in-Chief.Â  He continued to make the case that his progress and experience will eventually strengthen a tepid recovery, improve housing, lift employment rolls – the jobless rate stands at 7.9% – and break Washington gridlock as well as “push forward” initiatives to bolster education, job retraining and America’s business competitiveness.

Borrowing a line from his first campaign, he sought to get Iowans and viewers to get “fired up” to vote, knock on doors and make calls “so we can get a chance to finish what we started.”

As millions go to the polls today, victory in the most expensive presidential race in American history will be razor thin. Obama and Romney are in a statistical dead heat and the race may not be called into the wee hours of this morning.

As this season’s heated, nasty race comes to a close, there are a number of factors in play as the candidates vie for the 270 electoral votes up for grabs. One is the outcome ofÂ  continuous campaigning and flurry of ads in nine battleground states that include Ohio, Wisconsin, North Carolina, Virginia and Florida. Another is Hurricane Sandy which ravaged the Northeast – some analysts say Obama’s quick response and working with Republican Gov. Chris Christie to help millions in need has given him a boost over the past weekÂ  – and changed the voting dynamic in large numbers of precincts from electronic to “old school” write-in ballots. Moreover, the election which has been marked by more than 20 lawsuits in the past six months over voter rules including photo ID requirements and limited poll hours, may produce a wave of litigation over who gets to vote and which ballots are counted.

“It’s up to you,” Obama told Iowans and other crowds during his series of campaign stops, urging his coalition of African Americans, Latinos, women, progressives and young voters to stay in the long lines to exercise their franchise today as well as bring undecideds – including white blue collar workers – to the fold.

Although today’s election will bring a close to his last political campaign.Â  Obama seeks a second term to demonstrate that he is a true agent of change.

The Do’s and Dont’s of Negotiating Your First Salary

Havoc of Mobb Deep Gets “Political”