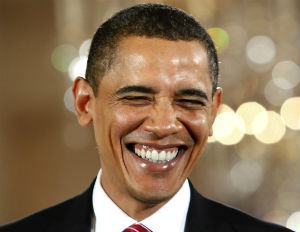 “Presidents don’t stick around after they’re done. It’s something I’ve been thinking about a lot.” –@POTUS at #WHCD: https://t.co/p1xFpHrSmP

Clearly reveling in the freedom granted from the looming end of his presidency, President Obama left nothing unsaid. And no one was safe.

Obama to Reince Priebus: “Glad to see that you feel you’ve earned a night off!” #WHCD pic.twitter.com/DB7Wi1DWbF

He also wondered, (along with the rest of the country) why Kendall Jenner was there.

Obama didn’t stop there. He made sure to get in jokes about his potential successors, Hillary Clinton and Bernie Sanders.

A few jokes for @HillaryClinton at @PresidentObama‘s last #WHCD https://t.co/w1dQgM4wOI

No word on what Sanders thought, but Hillary let us know she was cool with President’s jokes about her:
b

President Obama ended his speech with a nod to none other than Kobe Bryant.

“With that, I have just two more words to say: Obama Out.” –@POTUS #WHCD pic.twitter.com/RQSDh92YsU

Mr. President, you will be missed.

Why Malia Obamaâ€™s Gap Year Is the Real News