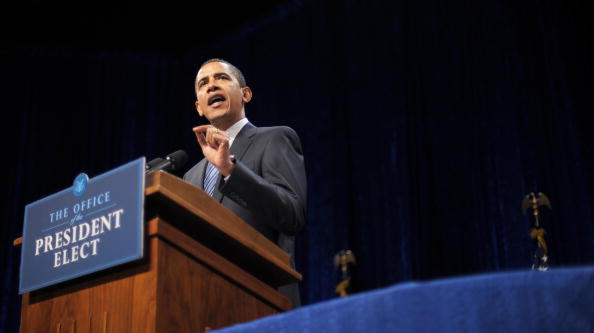 “If nothing is done, this recession could linger for years.Â  The unemployment rate could reach double digits.Â  Our economy could fall $1 trillion short of its full capacity, which translates into more than $12,000 in lost income for a family of four.Â  We could lose a generation of potential and promise, as more young Americans are forced to forgo dreams of college or the chance to train for the jobs of the future.Â  And our nation could lose the competitive edge that has served as a foundation for our strength and standing in the world.”

In his American Recovery and Reinvestment Plan, Obama outlined how his administration aims to stave off the momentum of the recession, re-ignite consumer and investor confidence and reduce government expenditures, an initiative he said would require attacking spending on such entitlements as Social Security and Medicare as well as eliminating waste through the newly created position of chief performance officer.

In a speech delivered at George Mason University in Fairfax, Va., Obama placed the blame for the current economic crisis on “an era of profound irresponsibility that stretched from corporate boardrooms to the halls of power in Washington D.C.”

Not mincing words, he cast a wide net of who was to blame, accusing Wall Street executives of making dangerous decisions, banks of making loans without concern for whether borrowers could repay them, and borrowers for taking advantage of cheap credit to take on debt they couldn’t afford.Â  Politicians were also made culpable.

But he offered up solutions to extricate the U.S. from its economic conditions and reminded people about the successes of the country.

“Our problems are rooted in past mistakes, not our capacity for future greatness.Â  It will take time, perhaps many years, but we can rebuild that lost trust and confidence.Â  We can restore opportunity and prosperity. We should never forget that our workers are still more productive than any on Earth.Â  We are still home to the most brilliant minds, the most creative entrepreneurs, and the most advanced technology and innovation that history has ever known.Â  And we are still the nation that has overcome great fears and improbable odds.Â  If we act with the urgency and seriousness that this moment requires, I know that we can do it again.”

To help jumpstart job creation and long-term growth, Obama aims to double the production of alternative energy in the next three years, modernize a majority of federal buildings, and improve the energy efficiency of two million American homes. Those moves will “put Americans to work in new jobs that pay well and can’t be outsourced — jobs building solar panels and wind turbines; constructing fuel-efficient