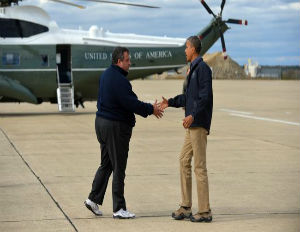 Christie greeted Obama at Air Force One in Atlantic City. Then they boarded Marine One for an hour-long aerial tour of the storm damage.

Governor Christie has been one of presidential hopeful Mitt Romney’s most ardent supporters, but he says Obama “deserves great credit,” for his response to the storm.

When Christie was asked whether Romney was coming to assist in the clean-up efforts he said, “I have no idea, nor am I the least bit concerned or interested.â€

Dazed & Delusional: Get Real About Your Professional Strengths and Weaknesses