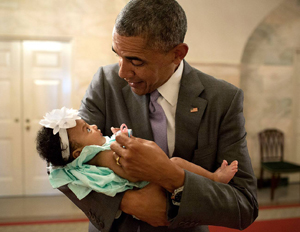 Obama’s “universal child care” plan unfortunately doesn’t ensure every child day care as the name suggests, but it does “call for a set of targeted tax breaks and spending initiatives for working families that would represent a commitment of more than $200 billion over 10 years,” according to Huffington Post.

Betsey Stevenson of White House Council of Economic Advisers told The Huffington Post, “This agenda would go a long way towards making sure our policies catch up with where the economy has gone, and it’s an agenda that is more than the sum of the parts because they all work together.”

The budget includes several other initiatives, one of which aims to increase the Child and Dependent Care Tax Credit (CDCTC), allowing parents to claim a portion of their child care expenses on their tax returns. Currently, the maximum credit is about $1,000 per child for up to two children, but most families don’t qualify to claim that because the value is based on income. If Obama’s universal child care proposal goes through, however, the allowance would triple and permit more families to claim it— “which, combined with the streamlining of some other tax breaks, would represent a net cost of about $50 billion over 10 years, according to sources.”

Other entities of Obama’sÂ proposal include paid sick leave and a stronger effort to make sure child care is safe and nurturing. The budget offers extra money to states seeking more qualified caregivers, and states that want to help parents who work non-traditional hours find quality care.

The President’s stance on early childhood investments is not a new one. “And for the poor children who need it the most, the lack of access to a great preschool education can have an impact on their entire lives. And we all pay a price for that,” Obama said in February 2013. “Kids who, when they go into kindergarten, their first day, if they already have a lot fewer vocabulary words, they don’t know their numbers and their shapes and have the capacity for focus, they’re going to be behind that first day. And it’s very hard for them to catch up over time.”

While Obama’s agenda has the potential to positively impact a lot of working families, there is expected pushback from conservatives who claim that it undercuts stay-at-home parents.