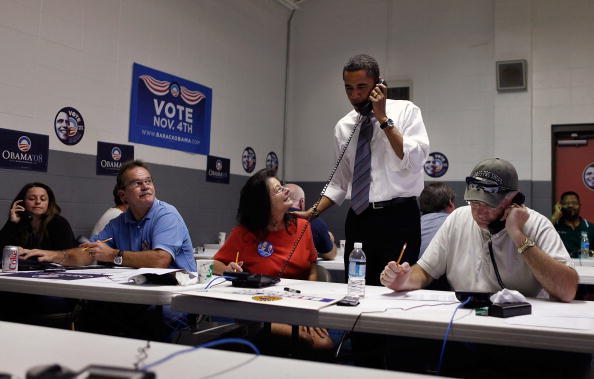 Sen. Barack Obama speaks with an undecided voter during a visit to a Â campaign office in Indianapolis. (Source: Getty Images)

Obama visited at the United Auto Workers Local 550 union hall and made a couple of calls in the get-out-the-vote effort targeting Democratic voters. Indiana is a competitive state this year and Obama, 47, is hoping to win the state’s 11 Electoral votes in his quest to become the nation’s first African-American president.

Supporters outside the union hall waved, cheered and took pictures with cameras in their cell phones as Obama’s motorcade sped away. It was Obama’s 50th trip to the state in the presidential campaign.

Earlier, Obama and wife, Michelle, were among the first to cast ballots in his Chicago precinct. Obama was expected to return directly to the Windy City from Indianapolis for a massive nighttime rally planned in Chicago’s Grant Park.

Voter turnout in Indiana and in a number of other closely watched states was crucial to the campaigns of Obama and GOP Sen. John McCain, 72.

“It’s been huge. That’s what’s been so impressive,â€ said veteran Democratic poll worker Richard Rowley, who was a legal observer at a voting location on the west side.

There are more than 600,000 registered voters in Marion County, where Indianapolis is located, said officials at the county clerk’s office. More than 90,000 voters cast absentee ballots or stood in long lines to cast ballots at one of the three early voting sites in the county. Only 24,430 early or absentee ballots were cast in 2004.

Several weeks of early voting ended at noon on Monday but those ballots weren’t expected to be counted until Tuesday evening, said county clerk Beth White.

“That’s a lot of ballots. It’s going to be a late night,â€ White told The Indianapolis Star.