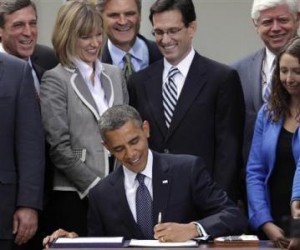 President Obama met with 13 CEOs of major corporations yesterday to talk about the fiscal cliff. CEO’s from a vast range of companies were in attendance including Wal-Mart, Honeywell, and Proctor and Gamble.

This meeting was part of the “The Campaign to Fix the Debt,” a group founded by former Fiscal Commission chairs Alan Simpson and Erskine Bowles.

There were no representatives of small business invited to this roundtable discussion that took place in the Roosevelt Room of the White House.

“What happened today at the White House is an insult to the business owners who create two-thirds of net new jobs,â€ said Dan Danner, President and CEO of the National Federation of Independent Business. “Make no mistake, today’s discussion between the president and Fortune 500 CEOs was about raising rates on small business owners, not on the people in the room.â€

Lobbyists for small businesses worry that the CEO’s in attendance might sell out smaller business. They feel many of the corporate leaders are recommending policies that protect big companies while leaving smaller ones exposed to huge tax increases. Some even feel that the companies in attendance are “tax dodgersâ€ because several companies use intricate loopholes to avoid paying taxes. None of the companies pay the standard 35 percent corporate tax rate, and some reportedly pay as little as 5 percent, according to The Daily Caller.

“It’s disappointing that he only meets with a segment of the business economy,â€ said Dirk Van Dongen, president of the National Association of Wholesaler-Distributors.

Van Dongen is part of a coalition of smaller businesses and trade associations that disagree with Obama’s effort to repeal the George W. Bush-era tax cuts for high-income Americans. Many small businesses are organized as “flow throughâ€ entities where profits are passed through to owners, then taxed at individual income tax rates. Those rates would rise under President Obama’s plan.

Chris Whitcomb, Tax Counsel at the National Federation of Independent Business said, “We are concerned that the White House is not thinking about the broader business community.â€

An administration official said the White House disputes the lobbyists’ claims and has plans to meet with small-business leaders in the future.