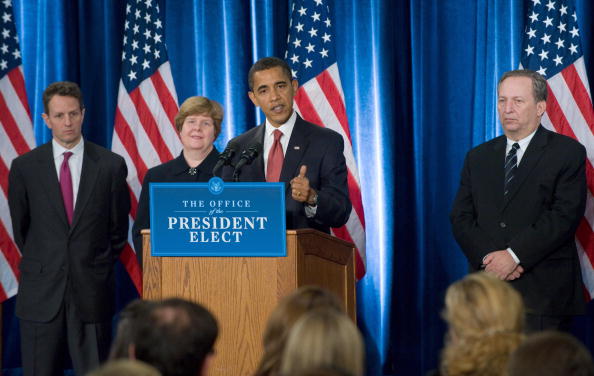 Promising that he would do all within his power to right the economy, President-elect Barack Obama today named his economic team for his new administration.

Obama said he would make good on commitments President Bush and current Treasury Secretary Henry Paulsen have made to rescue financial markets and urged the incoming Congress to immediately pass a major stimulus package to restore growth and create jobs.

“Right now, our economy is trapped in a vicious cycle: the turmoil on Wall Street means a new round of belt-tightening for families and businesses on Main Street — and as folks produce less and consume less, that just deepens the problems in our financial markets,” Obama said at a press conference. “These extraordinary stresses on our financial system require extraordinary policy responses.Â  And my administration will honor the public commitments made by the current administration to address this crisis.”

Obama also reiterated his recovery plan that woudld stabilize the U.S.’s financial system, gets credit flowing again, “while at the same time addressing our growing foreclosure crisis, helping our struggling auto industry, and creating and saving 2.5 million jobs — jobs rebuilding our crumbling roads and bridges, modernizing our schools, and creating the clean energy infrastructure of the twenty-first century.”

The incoming president said Geithner’s vast experience will allow him to quickly take charge of the current financial crisis, which is no “longer just an American crisis, it is a global crisis — and we will need to reach out to countries around the world to craft a global response.Â  Tim’s extensive international experience makes him uniquely suited for this work.Â  Growing up partly in Africa and having lived and worked throughout Asia; having served as Under Secretary of the Treasury for International Affairs — one of many roles in the international arena; and having studied both Chinese and Japanese, Tim understands the language of today’s international markets in more ways than one.”

Of Summers, who famously clashed with Cornell West while they were both at Harvard, Obama said that Summbers “was a central architect of the policies that led to the longest economic expansion in American history, with record surpluses, rising family incomes and more than 20 million new jobs.Â  He also championed a range of measures — from tax credits to enhanced lending programs to consumer financial protections — that greatly benefitted middle income families.”

At the press conference, Obama offered up criticism of the Big Three automakers, which are seeking $25 billion in government assistance.

The CBC to Exercise Greater Power in New Congress