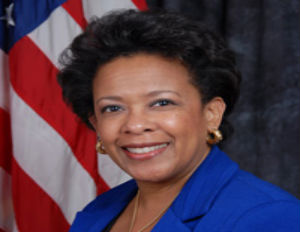 With Attorney General Eric Holder announcing in September his plans to retire, the Obama administration has beenÂ narrowing down its options for aÂ qualified candidate to fill Holder’s position.

While news has surfaced that President Obama may haveÂ dwindled down his nominees to include Solicitor General Donald Verrilli, Labor Secretary Tom Perez and U.S attorney for Eastern District New York Loretta Lynch, it’s being reported that Lynch is leading the race and on her way to making national history.

Serving in her second stint as U.S. attorney for Eastern District of New York, Lynch is known for serving on the trial team of many prominent cases, including the 1999 case where her team prosecuted and won convictions against the New York City police for violating the civil rights of a Haitian immigrant name Abner Louima, whom police officers beat while he was in custody.

While there’s no word on theÂ exact dateÂ forÂ when the president will announce the new attorney general, White House Senior Adviser Dan Pfeiffer tells Bloomberg that the announcement will beÂ made before Thanksgiving.

Beyond the Game: Michael Strahan’s Money and Power Moves