Obama Has Four-in-Five Chance of Re-Election on Tuesday 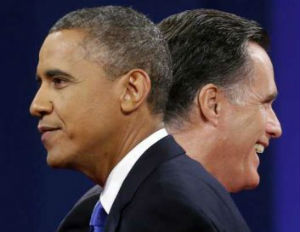 Just three days out from the election, President Obama holds a narrow lead in the polls, but that’s translating to a solid edge in the Electoral College. Because Mitt Romney needs to win crucial swing states like Nevada, Pennsylvania and especially Ohio to get the 270 electoral votes needed to win – and Obama holds solid leads in each of those states – Obama remains the prohibitive favorite to win. The statistician Nate Silver at FiveThirtyEight gives Obama an 84-percent chance of winning re-election on Tuesday.

Friday’s polling should make it easy to discern why Mr. Obama has the Electoral College advantage. There were 22 polls of swing states published Friday. Of these, Mr. Obama led in 19 polls, and two showed a tie. Mitt Romney led in just one of the surveys, a Mason-Dixon poll of Florida.

Although the fact that Mr. Obama held the lead in so many polls is partly coincidental – there weren’t any polls of North Carolina on Friday, for instance, which is Mr. Romney’s strongest battleground state – they nevertheless represent powerful evidence against the idea that the race is a “tossup.â€ A tossup race isn’t likely to produce 19 leads for one candidate and one for the other – any more than a fair coin is likely to come up heads 19 times and tails just once in 20 tosses. (The probability of a fair coin doing so is about 1 chance in 50,000.)

Read the whole entry at the New York Times.

Balcony Where MLK Was Shot Will Open to Visitors