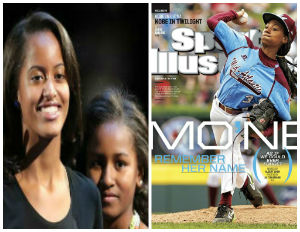 TIME has released its “25 Most Influential Teens of 2014” list, recognizing some of our favorite teens amongst the prestigious group.

Taking a look at social media followings, cultural influence, and business acumen, the list recognizes teens who have accumulated a significant following through their accomplishments in sports, music, business, or simply by carrying an esteemed family name.

Showing up first on the list is 13-year-old athlete Mo’ne Davis who made history this year by helping to lead her all-black baseball team to the Little League World Series. In August, she made headlines as the cover subject for Sports Illustrated, and her athletic ability has been praised by Michelle Obama, Kevin Durant, Ellen DeGeneres, and many more.

Joining Davis on the list are the Obama girls, whose every move has been watched and monitored since their dad took over the White House in 2008. Now 13 and 16, Sasha and Malia Obama are two teens on everyone’s radar.

When it was revealed that Malia went on her first prom date, President Obama jokingly said the details of the date were “classified.” In addition to making headlines for her prom date and her role as a production assistant on the set of Halle Berry’s sci-fi series “Extant,” the older Obama daughter has also been spotted pursuing typical teenage activities, including attending Chicago’s Lollapalooza Music Festival this summer, which caused just as much attention as the musical performers. Her younger sister Sasha has also proven to be a teen on everyone’s radar: A unicorn sweatshirt from ASOS was sold out within days because the young teen was spotted in the shirt.

Other teens on the list include Jaden Smith, whose influence has attracted more than 5 million followers on Twitter, Modern Family star Rico Rodriguez, the Jenner sisters Kendall and Kylie, and many more.

To see what other teens made the list and to vote for the most influential teen of 2014 head to TIME.com.