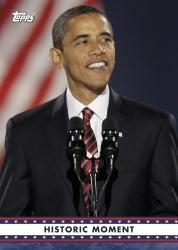 From buttons, T-shirts, and hats to Halloween masks and dolls …

Today, the Topps Company Inc. announced the release of an exclusive series of collectible trading cards that will pay tribute to President-Elect Barack Obama and his historic achievements.

The 90-card Barack Obama Inaugural Edition series will document Obama’s rise to success via colorful photos accompanied by facts about the presumed first black president’s life, beginning with his childhood in Hawaii and culminating with his ascent to victory in the 2008 United States presidential race. The set will be available in stores nationwide before to the inauguration Jan. 20. Each foil-wrapped pack will contain six cards, plus one sticker, at a suggested retail price of $1.99 per pack.

“The upcoming release of our tribute to Barack Obama carries on the company’s proud tradition of documenting significant and newsworthy moments in time,â€ says Topps CEO Scott Silverstein, in a news release. “These cards will resonate with the millions of Americans whose passionate outpouring of support provided President-Elect Obama with one of the most memorable and historic victories ever. This educational, entertaining and emotional collection is destined to become an instant classic.â€
Topps is known for releasing baseball card series and other sports collectibles, but the New York-based company has also commemorated non-sports milestones in American history. In the 1960s, Topps included President Kennedy in its “Man on the Moon” card series, and in the 1990s, the company devoted a series based on the nation’s Desert Storm initiative.

Ultimately, the new collection will provide “Americans of all ages and persuasions with the unprecedented opportunity to share in a unique and hopeful event in our country’s history.”
Founded in 1938, Topps is a creator and marketer of sports and related cards, entertainment products, and candy products.