O.J., Race, and Murder: The Story of an American Hero and Villain 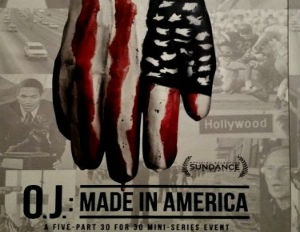 The following was written by Selena Hill:

I was initially apprehensive about watching the first three hours of O.J.: Made in America. I’m not a big fan of sports or giving O.J. Simpson – the former NFL star turned infamous convicted felon – any more publicity. So, needless to say, the thought of sitting through the first two episodes of ESPN’s nearly eight-hour mini-documentary did not sound like my cup of tea. Plus, it was an unseasonably cool Monday night in New York City, and I had a big bag of laundry at home with my name on it. Nonetheless, I decided to give the film a shot at a private screening. Turns out, that was one of the best decisions I made that week.

It took about 30 minutes before I was completely reeled into the film. And by the end of the second episode, I walked away yearning for more. Rather than simply focusing on the “trial of the century” that shattered Simpson’s all-American image, O.J.: Made in America tells the story of a man who has managed to captivate our country as both a hero and a villain. It also explores how the impact of racial politics and oppression helped relegate Simpson as a symbol of justice in the black community, even after it became clear to many Americans that he had murdered his second wife.

Produced by ESPN’s 30 for 30 series, the fictional film begins by delving into O.J.’s collegiate career as a superstar athlete at the University of Southern California. That’s where he made a name for himself as a standout running back and track star. You also get a glimpse of some of the marital woes he experienced with his first wife, a black woman named Marguerite Whitely, who was 18 years-old when she married the19-year-old athlete.

It was during his time at USC that O.J. became “seduced” by white society, says a childhood friend in the film. Although racial tension was heating up across the country, Simpson purposely disconnected from his blackness and the toils plaguing people of color. He also refused to use his platform to renounce racial oppression. Instead, he maintained a “colorless” personal that helped him gain more notoriety and acceptance in mainstream white America. It also made white people feel safe.

While walking through Simpson’s college career and assimilation into whiteness, the film brilliantly juxtaposes his rise to fame with the racial tension that dominated much of the 1960’s. It shows vintage footage black athletes like Jim Brown speaking out against racism. It also shows a clip of an interview where Simpson explained that he rather focused on building his own career and brand than get involved in the Civil Rights Movement.

The documentary goes on to explore Simpson’s rough start playing pro-football for the New York Buffalo Bills. However, through his persistence and dedication, he strengthened his game and became endeared as “The Juice.” He also succeed in breaking Jim Brown’s yard record and landed several corporate endorsement deals, making him the first black athlete to become the face of Hertz.

While still in his prime, Simpson moved back to California, divorced his first wife, retired as an NFL star, and married a beautiful, young, blonde woman named Nicole Brown.

All the while, the film contrasts the dim reality that black people faced in America. While Simpson was living in California’s predominantly white and elitist neighborhood of Brentwood, state activists were speaking out against police brutality, the Rodney King beatings, and unjust murders of black people.

Director Erza Elderman told Vice Sports that he intentionally juxtaposed Simpson’s peachy life in white America with the reality of racial oppression in order to convey how his acquittal became symbol a victory for black Americans.

“I completely understand why they were celebrating, and I hope people further understand and empathize with a group of people who were legitimately overjoyed. Having said that, the idea that they were overjoyed at the verdict merely spoke to how much injustice existed in this system for decades, if not centuries before,” said Elderman.

O.J.: Made in America captures America’s fixation on the O.J. Simpson murder trial through a historical lens that documents exactly why this case was bigger than O.J. himself, and it still manages to resonate with audiences 20 years later.

O.J.: Made in America will air in five installments on ABC starting on June 11.

Black Engineers Gather At This Major Leadership Conference Every Year