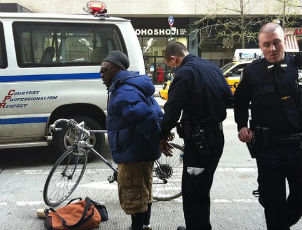 New York City voters are divided along racial lines over the New York Police Department’s “stop-and-frisk” strategy, according to a poll released Thursday.

The NYPD stopped close to 700,000 people on the street last year. Nearly 87 percent were black or Hispanic, and about half were frisked. About 10 percent were arrested.

Jay-Z’s Influence On Brooklyn Nets Goes Beyond His Investment