When NYC Businessmen Attack Each Other Over a Cab 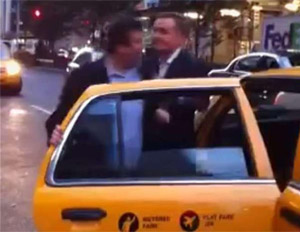 Cabs can be a rare commodity during rush hour in New York City. For two New Yorkers, it turned ugly.

In a video posted on Youtube, two unidentified New York businessmen push and shove each other over a cab!

The passenger was still inside the vehicle attempting to get out when the two began to fight. He tried to calm them down, but the pushing and slapping continued until one reigned victorious.

Ann Coulter: “Civil Rights Are Only For Blacks, Not Gays”