What It Takes to Win in Business and in Sports-Twice! - Black Enterprise 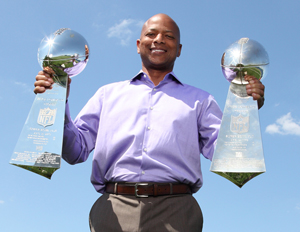 Since being named General Manager of the New York Giants in 2007, Jerry Reese has helped his team win two Super Bowl championships. During his tenure the Giants have won two NFC East championships, earned three postseason berths and have finished .50 or better in every season.

With a keen eye for talent, players he helped sign made pivotal plays in each of those Super Bowl victories and Reese remains the only African American General Manager in the NFL to ever win a Super Bowl. BLACK ENTERPRISE Editorial Director Alan Hughes caught up with the 48-year-old Reese at the team’s offices to get his tips on what it takes to win.

Whenever a team wins a championship, there’s always a hemorrhaging of talent—both players and coaches are lured away by other teams. What measures do you have in place to keep the team highly competitive, despite that reality?

Jerry Reese: We believe that you develop players. You can fix a few things through free agency, but we believe in drafting players and developing players. That’s kind of what our philosophy has been. We don’t have a template. Every year is different, so we use free agency. We use the draft. We use trades. We use all different types of ways to get our personnel to where we want it to be and we never stop trying to upgrade the personnel as the year goes along. You can’t keep them all. With the salary cap as it is now, you can’t keep all the players and you know you’re going to lose some players, but you have to try to keep a good core of the players on the offense and defense and special teams. If you can keep good core players, then you can fill in around them with draft picks and free agency, and I think we’ve been able to follow that a little bit and make it work for us.

You have a reputation as someone that’s got an eye for talent. What are some of the things that you look for when you say, ‘I can see this guy on my team?’

Reese: Well, first of all, we like guys who are going to play into our team philosophy. That’s what’s important to us. If you come here, you’ve got to play as a team. We don’t try to outshine each other. We shine together here. That’s the first thing I talk to players about. This is how we do it here. We’re the Giants. We play together as a team. There are a lot of individuals, good individual talented people, but if you come here, you’ve got to leave your ego at the door and play as a team. If you do those things, we’ll win and we’ll have a chance to win a Super Bowl, if you do those things. So I think we look for that first and we look for talent, just like everyone else. I don’t think we’re unique to any other personnel people in the National Football League. We look for talent. We look for height, weight, speed, intelligent players, tough physical players–just like everybody else.

You were involved with the Eli Manning acquisition years ago, as well as Justin Tuck and now Victor Cruz. Tuck and Cruz kind of came out of nowhere, at least from the outside. What is it that determines whether or not you are going to go for like a big name free agent or just develop someone?

Reese: We’re not going to pigeonhole ourselves with this template this is how we’re going to do it. We just, what do we need, and we look for it. We might get it in the draft. You might get lucky and get a Victor Cruz. In a Victor Cruz situation for us, he was a local free agent. We had him rated just like everybody else. Right now at this point, people like to say, wow, you guys were smart because you got Victor Cruz. We were just like everybody else. He was just a local free agent. We had him ranked as a guy with a couple of redeeming qualities that we liked and that’s the beauty of personnel, because you can get a guy like Victor Cruz, and he can just blossom and take off and that’s really what happened to him.

You mentioned Justin Tuck. Justin Tuck was a third round draft pick and he came out as a junior, but he had some injuries his junior year, so that probably pushed him down on the draft board for some people because he had some injuries. He played really good as a sophomore. We liked him and he has blossomed, and probably if he had stayed his senior year, he probably would have been a first round draft pick. You have to look deep in the draft. Again, you have to get lucky sometime in the draft and be able to sign some undrafted free agents like Victor Cruz, who did a tremendous job for us last year.

If I’m an entrepreneur and I bump into you and I say, “Hey, I deal with a lot of the same things you deal with; talent, keeping talent, affording that talent. Give me a nugget of wisdom. Help me.â€ What would you say?

So, the team is built around role-players?

Do you have an organizational mantra or philosophy and if so, how do you communicate it to everyone?

Reese: Again, our philosophy, is about us. It’s about the team. It starts at the top with the organization, with owners and me, who believe in the head coach and they let us do our jobs. Again, it’s all about the team. I keep saying this, we don’t try to outshine each other, we try to shine together. When you do that and you have a team concept, you care about each other, I think you have a better chance to be successful, when it’s like that. I think that’s what our philosophy, if that’s such a thing, philosophy.

Where do other others go wrong? There are organizations that are not able to do what you’re able to do.

Jerry Reese: I think we’ve been blessed and fortunate in some ways and there are different ways to skin a cat. Just because we’ve been successful doing it this way, doesn’t mean other teams aren’t successful in other ways. We don’t win a Super Bowl every year, so there have been other teams who’ve won it and have really played well and won championships, just like we have. That’s our philosophy — that works for us. I don’t have a good answer for you, where other teams go wrong. I don’t know if other teams are going wrong. Again, you got to have some luck. You got to have some players and you got to have some coaches to put your players in the right positions. We have a good combination of those things. I don’t want to take too much credit for us being successful. We have everybody pulled in the same direction, that’s why we’re successful. It works for us. Everybody is pulling in the same direction.

How to Tap Into Your Willpower

Diversity Can Be a Driving Force in Business Growth