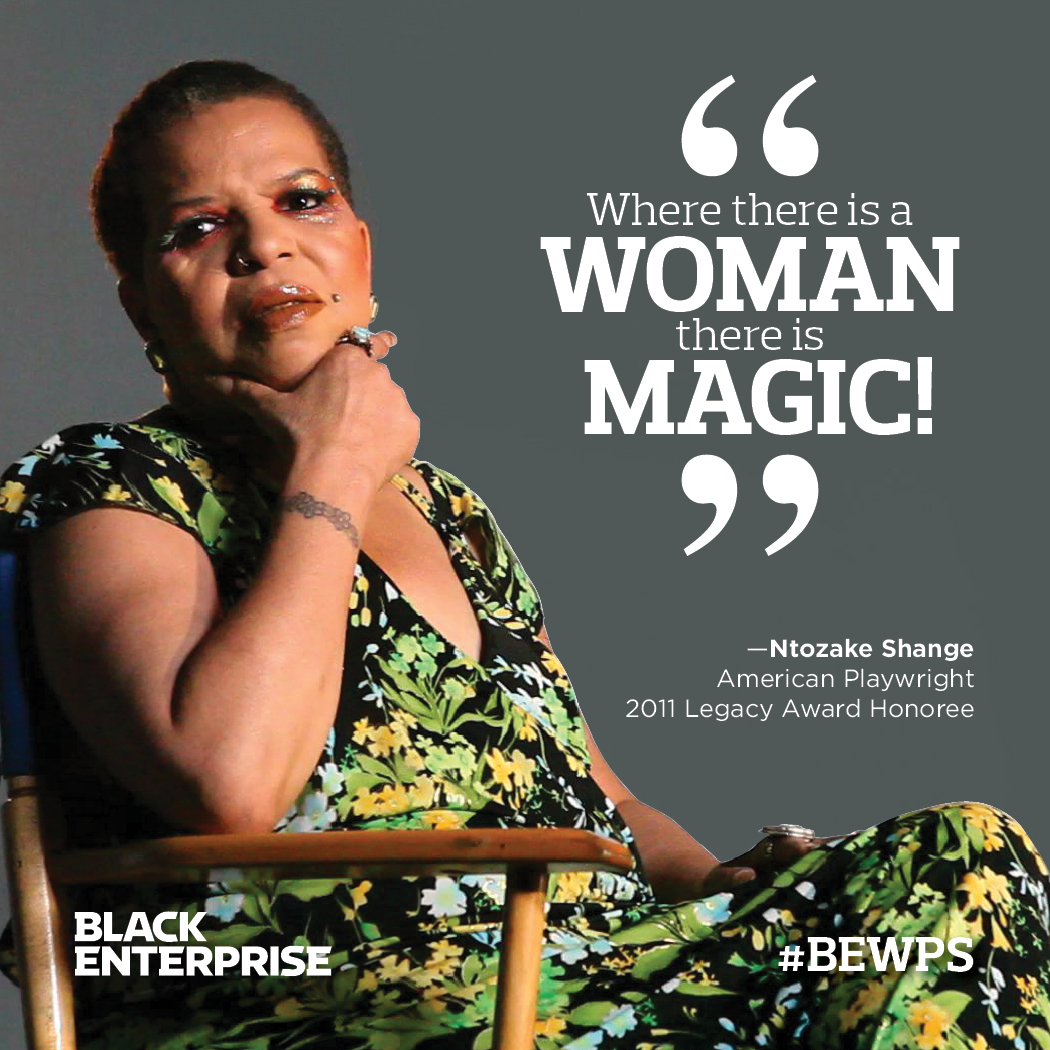 The Black Enterprise Women of Power Summit is the nation’s No. 1 executive development and leadership conference for women of color, annually attracting more than 700 corporate executives, professionals and businesswomen from across the country. This year’s Women of Power Summit, hosted by State Farm Insurance, will take place February 26-March 1 at the Boca Raton Resort and Club.

In addition to bringing together women who are serious about making power moves, the Women ofÂ  Power Summit also honors those leaders among them, outstanding women who receive the coveted Legacy Award.

The Women of Power Legacy Award recognizes outstanding impact, achievement and leadership by women in business, the arts, education, government and other influential industries. Past recipients include such luminaries as Ntozake Shange (phonetically n-to-zaki shan-gay), a playwright, poet, and self-proclaimed feminist who addressed issues relating to race and gender in much of her work.

As a self-producing playwright myself, I cherish my autographed copy of For Colored Girls Who Have Considered Suicide When the Rainbow is Enuf, the “choreopoemâ€ written some 40 years ago by Shange (born Paulette Williams). I fondly remember those times I watched the play performed on stage from college theaters to Broadway productions. I loved hearing “no assistanceâ€ and “somebody almost walked off wid alla my stuff,â€ two of my favorites.

The 65-year-old Shange’s For Colored Girls is her most famous work. The 20-part poem chronicles the lives of black women in the United States. It is performed by a cast of seven women characters, each of whom is known only by a color: “Lady in Yellow,” “Lady in Purple,” “Lady In Brown,â€ “Lady In Red,â€ “Lady In Blue,â€ “Lady in Orange,â€ and the “Lady In Green.â€

First staged in 1974 in Berkeley California, For Colored Girls speaks to issues of domestic violence, rape, incest, abortion, sexuality, spirituality, and heartbreak. It eventually made its way to Broadway in 1976, winning an Obie Award and being nominated for a Tony Award. It was published in book form in 1977 and then made into a movie in 2010 (directed by Tyler Perry). As with the play, the message of the movie is sisterhood and triumph out of victimhood. For Colored Girls the movie exposed a new generation to its legacy.

I’m appreciative of the film version For Colored Girls. Is the movie as good as the play? No. But most film adaptations are rarely as good as the book. Transitioning the stage play to the movie screen undoubtedly was challenging since the original work was a transformative mix of poetry, dance and drama.

Shange’s play is about overcoming pain and diversity rooted in the thorny field of romantic relationships. It was dark events in her own life, including suicide attempts after a failed marriage, that inspired her to create For Colored Girls. She turned her poetry into a dramatic narrative about love, betrayal, loss, deceit, resilience and sisterhood.

The end of the play brings together all of the women for “a laying on of hands,â€ in which Shange evokes the power of womanhood as the Lady in Red begins the mantra “I found God in myself & I loved her/I loved her fiercely.â€

The title of For Colored Boys Who Have Considered Suicide When The Rainbow is Still Not Enough: Coming of Age, Coming Out, and Coming Home, a 2012 anthology of essays edited by TV commentator Keith Boykin, was based on the title of Shange’s play.

While the film For Colored Girls was selling out movie theaters, Boykin recognized young black gay men were literally committing suicide in the silence of their own communities. His book addresses longstanding issues of sexual abuse, suicide, HIV/AIDS, racism, and homophobia in African American and Latino communities, and more specifically among young gay men of color.

Sparks Owner Magic Johnson: ‘This Is a Great Day for the City of Los Angeles’