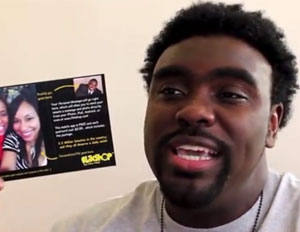 Marcus Bullock used his time in prison to study business, take charge of his life, and help inmates get back on track. (Image credit: YouTube)

Communication is important to inmates, especially from loved ones. And it’s what inspired former inmate Marcus Bullock to create his own tech company to help prisoners receive messages from loved ones.

According to CNN Money, Flikshop is an app sprung from the mind of Marcus Bullock, a former inmate who was tried as an adult at the age of 15.

After being released in 2004, Bullock set off on his own quest to better himself. Even before Flikshop, Bullock was on the path to entrepreneurship. He opened his own building remodeling company after working at a paint store when he left prison.

Flikshop comes directly from Bullock’s experience as an inmate. “In prison, mail call is the best part of the day, every day,” Bullock said. “And actually getting mail is like hitting the lottery.â€ He felt firsthand how getting messages from loved ones can help keep a person on track for improving their life. While incarcerated, Bullock studied, received his GED, and took college courses in business as well as computer software.

The iOS and Android app lets people send messages to inmates. At 99 cents a postcard, you can send a picture as well as a personalized message. Flikshop has three employees, developers Bullock found to help him make the app itself.

To get Flikshop off the ground, Bullock partnered with advocacy groups and started his own entrepreneurship group, Bring in the Community, to help prison inmates learn from entrepreneurs in the community.

“I’ve faced a ton of adversity,” Bullock told CNN. “I’m a young black kid talking about launching a tech company with no VC backing, I didn’t have any background in tech … no one took me seriously.”