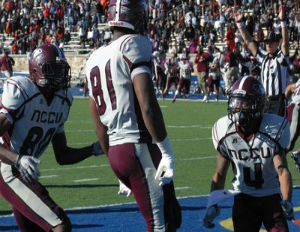 Nothing’s quite as bad as losing on your home turf, and it’s twice as bad when you lose at homecoming.

That’s precisely what happened to Morgan State when they faced Durham’s North Carolina Central Saturday night in Baltimore, in what has been described as a “heartbreaker.”

With less than a minute on the clock, the Bears led the Eagles by three points, but tight end Detwan Robinson from NCCU caught a short pass and broke through three tackles to make the winning touchdown.

Morgan State will have to shake this loss off as they travel to Washington, D.C. to take on the Bisons at Howard University’s homecoming on Oct. 20.

Read more at The Herald- Sun.

Do Blacks Dislike Affirmative Action, Too?