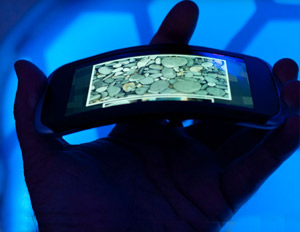 Over the past few years, touchscreen technology (also known as multi-touch) has become all the rage with practically every new mobile, tablet and computing device touting the feature. However, mobile phone maker Nokia is ready to take the tech a step further.

During the annual Nokia World conference in London, the company’s researchers introduced the prototype for their new “kinetic device,â€ which features a flexible more durable display that allows users to bend the screen as opposed to touching it for operating standard functions. For instance, instead of sliding your finger across the display screen to scroll through pictures, this requires a bend of the wrist while gripping the device with both hands. Other functions would be controlled through similar screen contortions.

According to CNET the product is still a ways from reaching market, but a workable floor model was unveiled at the conference that resembled a slim remote control and could be operated with one hand. The man behind the technology is Tapani Jokinen, who’s spent the past two years developing it, and remains tight-lipped on the specifics of how the kinetic device works. However, in an interview with Stephen Shankland, Jokinen did list the potential for this technology, which would allow users to better operate a device while walking and access functionality while wearing gloves, to revolutionize the industry upon its eventual release.

While the release date of Nokia’s kinetic device is still uncertain, here is video footage of the prototype in action.