The late J. Bruce Llewellyn was a catalyst for partnerships between black entrepreneurs and major corporations. He partnered with Julius Erving and Bill Cosby to launch Philadelphia Coca-Cola Bottling Co., the first black-owned soft drink bottling franchise. With another group of black investors, he later started Queen City Broadcasting, one of the largest black-owned television networks in the nation. 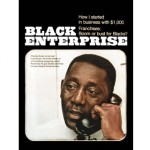