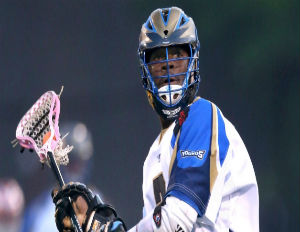 Twenty-three year-old Jovan Miller of the Charlotte Hounds, one of only three professional African-American lacrosse players in the country, is refusing to play because of a Â slogan, “#NinjaPlease,â€ being used by Major League Lacrosse’s sponsor, Warrior Sports, in a recent campaign. His boycott could jeopardize his future in the sport.

A few weeks ago, Miller began noticing his Twitter followers using the hashtag “#NinjaPlease.â€ It was being used by Warrior Sports as an advertising campaign slogan for its “Dojo” shoe. The company has since ceased using the slogan.

“It kind of alarmed me at first,â€ Miller told WCNC TV. “The actual meaning behind ‘Ninja Please’ is the ‘N-word Please.’ They put ninja in it to kind of disguise it.â€

“If I won’t wear the uniform, obviously I can’t play,â€ Miller told WCNC.Â “This doesn’t just affect me. I’m not just speaking for myself. I’m speaking for every black man or black girl who has ever picked up a lacrosse stick,â€ Miller said.