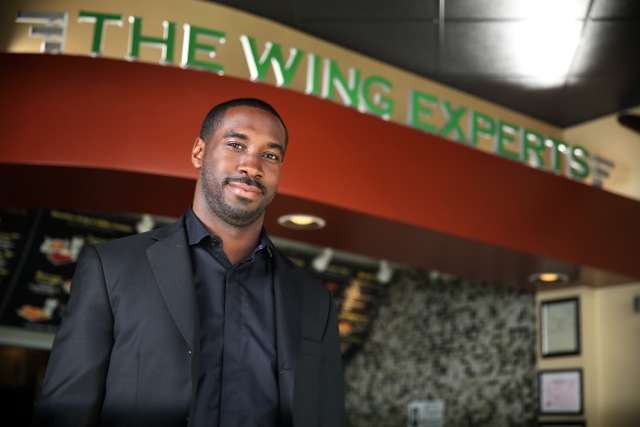 Shawntae Spencer is one of a Wingstop's investors with deep roots in the National Football League. He partnered with the Richardson, Texas-based chain to open 15 restaurants in the Greater Pittsburgh area.

Sometime before the start of last football season, his ninth in the NFL, Shawntae Spencer sat his family down for The Speech. Daddy wasn’t going to be playing any more football, he told them. By then the ball was rolling for Spencer, then just 30 and newly signed to the Oakland Raiders, to open 15 franchises of the Richardson, Texas-based chicken giant Wingstop to his native Pittsburgh — which is to say he’d already begun to eat a whole lot of Wingstop.

“On travel days in Oakland we’d make the rookies go out for food,â€ said Spencer, who played the first eight years of his career with the 49ers. “I’m excited. Pittsburgh is a big sports town, and there’s not a dominant wing provider in the greater Pittsburgh area and Wingstop’s got a different model. It’s kind of like that sweet spot that Chipotle found in the Mexican space, serving restaurant quality food. We’re still going to be at that quality or even better.â€

When the first store opens (his team is aiming for a May 2014 debut) there will be no shortage of takers willing to take Spencer at his word. According to the U.S. Poultry and Egg Association, the average American ate fifty-eight pounds of chicken in 2010. The USDA’s Economic Research Service says chicken raisers will produce 36 billion pounds of chicken — broilers, they’re called in industry parlance.

“Chicken’s not just one of those things where it’s looked at as just an appetizer,â€ Spencer says enthusiastically. “Now it’s really a center of the plate dish.â€

The league’s fraternity of current and former players are no strangers to the restaurant business. Their names have been attached to barbecue stops, steak houses, burger joints and pizza spots. But a crop of athletes-turned-entrepreneurs are putting an increasing amount of faith and dollars on the future of a proven commodity: Chicken.

As an investor in Wingstop, Spencer joins a class of NFL alumni which includes former stars Willie McGinest, Ron Stone and Hall of Famer Troy Aikman, who is the company’s national spokesman. And in recent weeks, Wingstop announced it was making a splash in the Northwest by partnering with the Seattle Seahawks wide receiver Sidney Rice.

“Wingstop is my favorite restaurant,â€ said Rice, who is teaming up with another Washington-area owner to open five additional restaurants. “I travel a lot, and as soon as I land, the first thing I do is find the closest Wingstop. They have the best wings and always make them fresh to order. When I was given the opportunity to join the company, I knew it was a chance I couldn’t pass up.â€