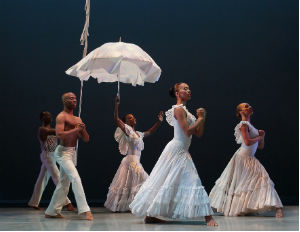 On May 6—8 at the New Jersey Performing Arts Center (NJPAC), the celebration will continue with a tribute to Alvin Ailey Artistic Director Emerita, not to mention legendary dancer and choreographer, Judith Jamison. Jamison joined Alvin Ailey American Dance Theater in 1965 and quickly became an international star, having been the muse of Ailey himself. Today, Jamison is committed to promoting the significance of the Ailey legacy– using dance as a medium for honoring the past, celebrating the present, and fearlessly reaching into the future.

The program will include Robert Battle’s world premiere since becoming artistic director of Alvin Ailey, Awakening, a piece that is said to lead the audience on a cathartic journey of dissonance and harmony, chaos and resolution. Ronald K. Brown will also share the world premiere of his work.Â Open Door, and there will be a new production of Judith Jamison’s A Case of You, not to mentionÂ a performance of Alvin Ailey’s signature piece, Revelations.

Prudential proudly sponsors Newark 350 as part of a larger, rich relationship with Newark, New Jersey. “We have many reasons to celebrate this year’s achievements and we look forward to continued positive change in 2016–a year that will mark Newark’s 350th anniversary,â€ says Lata Reddy, Prudential vice president, Corporate Social Responsibility. “We are already seeing how this year’s developments have helped attract new jobs, a broader pool of skilled local talent, more urban consumers and vibrant streets, and we’re excited for what’s in store for the city we are prouder than ever to call home.â€