New York City Is Bringing Wi-Fi to The Public 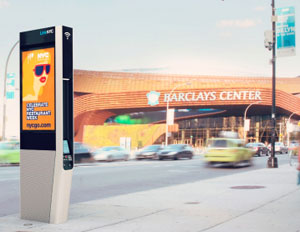 New York City payphones are getting an upgrade almost everyone will agree with.

LinkNYC is a proposal to upgrade the current system of payphones throughout New York with state-of-the-art terminals providing Wi-Fi access and other services.

The project’s creator is City Bridge, a consortium of technology groups who want to use the Link system to create the fastest municipal Wi-Fi network. Supposedly, the network will be “more than 20 times faster than the average home Internet service in NYC,” according to the LinkNYC site.

While the iconic open-faced booths will be removed, in its place will be an miniature aluminum obelisk providing gigabit-speed public Wi-Fi access.

It will have a built-in Android tablet providing directions and other information about the city, make free phone calls, and a charging station for smartphones.

LinkNYC’s gigabit Wi-Fi does raise a few questions, as most devices with Wi-Fi are unable to support gigabit speeds, and the faster 802.11ac Wi-Fi is slowly finding its way into devices like smartphones.

The LinkNYC network (which will span all five boroughs) will supposedly come at no cost to taxpayers, and instead receive funding through advertising revenue from the giant display on the side of the commercial Link. The project is expected to generate over $500 million in revenue over the next dozen years.

The first Link structures are scheduled to be operational by the end of 2015. The plan includes a roll out of a whopping 10,000 Link structures throughout the five boroughs.

The only thing it’s missing is a MetroCard dispenser.