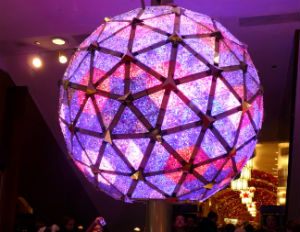 Are you going to be in New York this New Year’s Eve and don’t want to stay inside? Then check out these five ways to get out of the house and ring in the new year in New York City.

1. Times Square Ball Drop
Perhaps the most well-known New Year’s Eve tradition for tourists and even for native New Yorkers is the Time’s Square Ball Drop. Located at the roof of One Times Square, the ball is a major part of many New Year’s Eve celebrations. As the crowd of thousands gathers to begin their celebrations, the ball descends 141 feet in 60 seconds, down aÂ  flagpole starting at 11:59 p.m. ET, and resting at midnight to signal the start of the new year.

[Related: Top 3 Fun Ways to Ring in the New Year in Las Vegas]

2. Sail Around on a Cruise
How does touring some of NYC’s most famous sights, such as the Brooklyn Bridge, the Empire State Building, and the Statue of Liberty, while listening to a DJ or jazz band play live music sound? Not to mention a champagne toast at midnight and magical view of the fireworks over the city, New Year’s Eve boat tours are a very popular and special way people choose to spend their night.

3. Attend a Lively Concert
Celebrate the New Year with your favorite band or artist. New York City is known for its amazing venues and concert halls, so check out some of the best concerts happening on New Year’s Eve in NYC this year.

4. Go to a five-star restaurant
With all the cuisine and fine dining New York has to offer, you can’t go wrong when it comes to making dinner plans. Whether you want to spend the night at a chef’s tasting party or have a set five-course menu, check out several specials and dinner ideas here.

5. Attend a Pajama Party
Where else in the world can you celebrate the New Year in pajamas in public? Bar Cyrk hosts an annual New Year’s Eve Pajama Party, where you can wear your favorite PJ’s and eat great food, along with an open bar. For more info or to purchase tickets click here.

10 Startup Celebrities and What You Can Learn From Their Success