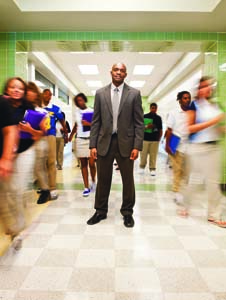 From kindergarten to 12th grade, Will Thomas never had a black male teacher and only once had a black female teacher. “I felt like we weren’t represented in the classroom, and it bothered me throughout my school experience,â€ says Thomas, referring to his years growing up in Ellenville, New York, a relatively diverse community.

Now a teacher in Prince George’s County Public Schools system in Maryland, Thomas, who has a bachelor of arts in social studies from the State University of New York at Albany and a master of arts in reading education from Bowie State University, took it upon himself to turn the tables.

He hasn’t limited his goal of being a role model to the classroom. Thomas, the 2008—2009 Prince George’s County Teacher of the Year, aims to teach students to perform at a higher level and prepare them for college. And he has made progress.

When he first started teaching Advanced Placement government at Dr. Henry A. Wise Junior High School in 2007–where 90% of the student body is African American–not one of his students attained an acceptable score of 3, 4, or 5 on the AP exam. His initial reaction was to blame the students, but he realized that would be taking the easy way out.

So he raised the bar for himself. In 2010, 23 of his 88 students passed the exam with acceptable scores; and he’s seen a marked increase among the young black men. That improvement could be attributed to a number of things: the tutoring time he added during and after school; the workshops he attended to improve his teaching strategies; his requirement that parents attend field trips with students; or the political activities he engaged in himself.

But Thomas, a national board certified teacher, didn’t stop there. He worked during evenings and summers to assist with curriculum writing for the PGCPS social studies office, and each day, including weekends, he spends an additional two to three hours above the contracted workday grading and preparing lesson plans. In addition to his classroom obligations, Thomas volunteers after school as a mock trial coach, and he runs an online investment club for students.