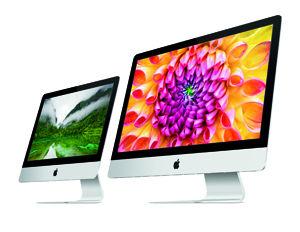 Every year Apple jazzes up its big-screened desktop in hopes of wowing customers again with the gadget’s elegant design and efficiency. The tech giant’s new iMac, which will hit stores on Friday, Nov. 30, is its thinnest desktop ever.

The new iMac is nearly paper-thin compared to its predecessor, boasting 40% less volume and measuring only 5mm, or 0.2 inches, thick at its top edge. Other highlights include: 75% less reflection off the front of the glass than the previous iMac to allow for less glare; the colors on the screen appear more vivid; multiple quad-core processor options; up to 16GB of RAM; a new Apple Fusion Drive; and that Nvidia Geforce GT 640M graphics improve the computer’s power, speed and storage.

iMac’s slimmest and most advanced computer yet is “powerful enough for a design studio, production house, or science lab. And beautiful enough for any room in your home,â€ according to Apple.

The desktop may be so beautiful you might temporarily neglect your other Apple devices. (We’d understand!) The widescreen computer will be sold in 21.5-inch models with a 1,920-by-1,080 pixel resolution display and retailing for $1299. The 27-inch models will ship out in December and start at $1799.Â  Also look out for the new iTunes 11 to release today.