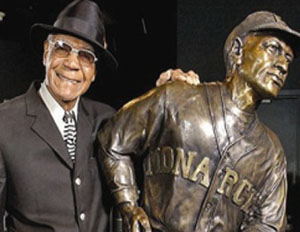 On July 8th, Major League Baseball players and fans will descend on Kansas City, Missouri, forÂ All-Star Weekend. But what Bob Kendrick wants fans to remember are the Negro Leagues baseball players likeÂ Buck O’Neil, who helped the Kansas City Monarchs rule the Negro Leagues for nearly five decades from the 1920s through the 1950s.Â The Kansas City Monarchs produced the greatÂ Satchel Paige andÂ Jackie Robinson, before Robinson broke the color barrier in the Major Leagues.Â This history and more can be seen at theÂ Negro Â Leagues Baseball Museum (NLBM) in Kansas City, where Kendrick is president and the torch bearer for the institution.

The legends of the NLBM and harbingers for many of theÂ CC Sabathias and Matt Kemps (both supporters of the museum) of today. With NLBM’s vision to expand the organization and renovate the Paseo YMCA, where the Negro Baseball League was conceptualized, into theÂ Buck O’Neil Education and Research Center, Kendrick is happy about the timeliness of the All-Star event being held in Kansas City, and sees it as an opportunity to ensure legends such as Josh Gibson, Oscar Charleston, and Cool Papa Bell are not obnubilated.

BlackEnterprise.com spoke to Kendrick about the museum’s plans.

What are you doing in preparation for this year’s All-Star weekend?

Kendrick: We have a new featured exhibit titled “They Were All Stars,â€ which chronicles Negro League players that transitioned to the majors and subsequently became All Stars. This exhibit is free and open to the community, thanks to MLB and the Kansas City Royals’ partnership, helping everyone feel a part of the festivities even if they can’t afford to attend the game.

Why is it important for people to support the NLBM?

Kendrick: The reason it’s important is that these players should not only be celebrated for what they did in the face of adversity to play baseball, but also what they did for the advancement of American society. It’s a travesty that people can go through their education without knowing the story of the Negro leagues, but this museum was founded so that this history would not die with the last players.

And how can they support?
People can support through our licensing program, admissions, gift shop, membership, corporate partnership program, and our traveling exhibit. We anticipate reaping residual benefits from this special weekend.

3 Reasons Being A Brown-Noser Can Backfire