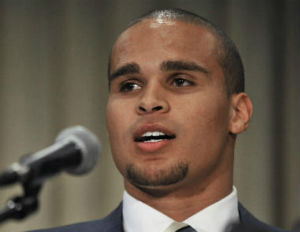 The Chicago regional office of the National Labor Relations Board (NLRB) has ruled in favor of the College Athletes Players Association (CAPA) in determining that the scholarship football players at private Northwestern university had the right to form a union. Courageous leadership by Kain Colter of Northwestern and CAPA founder Ramogi Huma led to this victory. Now, everyone is crying in their beer because the discussion has focused on athletes being paid. But, CAPA is about all that unions do: giving voice to the workers.

Too little attention is focused on issues of player safety and health in the media storm following the ruling. For instance, almost no mention has been made of the new $1 billion TV contract for the NCAA and the lack of long-term health assistance to former players who have been injured. And, few reporters have read the decision to understand the facts presented: including “voluntary” meetings extending beyond the four hours a day of required practice allowed by NCAA rules, organized practices between 7:50 a.m. and 11:50 a.m. Tuesday through Thursday that clearly conflict with scheduled coursework and travel time to and from games, not included in the NCAA count of time players spend. In all, players spend 40 to 50 hours a week on football during the fall semester of classes.

Some are taking this as a teaching moment to reflect on access to higher education more broadly. During March Madness, some of the ironies are in full display. UCLA, with a storied history in college basketball, made it to the round of 16 this week in the NCAA Division I men’s basketball tournament. Less noticed is that this past fall, UCLA admitted only 48 male African American freshmen. Many of the universities we see on television in March show basketball teams with great diversity. Yet, their broader study body does not look so diverse.

To young African-American men, in particular, is there little wonder then that sports appear to be the real ticket? Currently, the U.S. Department of Education is touting rules that ironically will benefit these same schools, as if they were models in developing the talent America needs for its future given that the majority of Americans born this year are of color and 20 percent of American children are poor. The scorecard the department envisions does not reward the schools doing the heavy lifting outside this limelight.

RELATED: Adidas Blocked Out of Contracts by College School Programs

Howard University, Spelman College, Xavier University of Louisiana, Hampton University, Florida A&M University and Morgan State University are the top six in the nation in producing black workers who will go on to earn doctorates in the STEM fields. Massachusetts Institute of Technology (MIT) is a distant member of the leaders, in 12th place.

Yet, the Education Department is pursuing a scorecard slanted to be a model for universities with huge endowments and already high tuition like MIT. That model doles out discounts to some students who need help paying tuition and saddles many with debts. The model does not scale up to handle large numbers of slots for students who qualify for Pell grants-which max out at $5,645 a year. Among top schools, Harvard and MIT look good for having 20 percent of their students eligible for Pell Grants. At Tuskegee, 64 percent of students get Pell Grants, as it is high for most HBCUs. But without the $32 billion in endowment of Harvard or the $11 billion endowment of MIT, and without being able to charge tuition rates of around $43,000 like Harvard and MIT, it is a huge challenge to provide assistance to such a large number of students without the means to pay; and leads to rising debt for others.

The other solution is for America to commit to dramatically increase investment in our colleges – publicly endow them – to make access to college an American right – not leave access to the vagaries of past inequalities and the elites who aren’t measuring up in delivering access or diversity on the necessary scale.