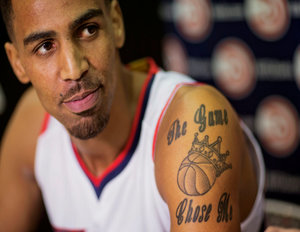 Several days ago Atlanta Hawks forward Thabo Sefolosha was caught in the middle of a particularly bad situation. According to an ESPN report, the players were in town to play the Brooklyn Nets at the Barclays Center on Wednesday night and had arrived late Tuesday after playing a night game in Atlanta. Details were sparse at the time, but the report stated that during a night out with Hawks teammate Pero Antic at the New York City nightclub 1Oak, things turned violent. Indiana Pacers forward Chris Copeland, who was also in attendance at the club, but in a separate party, and female friend Katrine Saltara were attacked and stabbed after leaving just before 4 o’clock am. ESPN reported that Copeland sustained injuries to his stomach, and Saltara suffered injuries to the arm and chest. Sefolosha and Antic were not in the initial vicinity of the violence, butÂ ‘were arrested on charges of obstructing the crime scene, after police said they blocked officers from trying to start their investigation.’

The bad situation was made worse the following day when it came to light that Thabo had been injured during the police interaction. Kevin Arnowitz of ESPN made the injury announcement and detailed specifically that Sefolosha had suffered aÂ broken right fibula and ligament damage. The fuzziness of the situation began to clear up after a TMZ video was released showing footage of the police interaction with the two Hawks players.

The video shows several officers wrestling Sefolosha to the ground and there is a point in the video where one officer appears to take out his baton and swing in a downward direction possibly making contact with the player.

Conflicting reports from police, witnesses, and Sefolosha, continue to muddle the situation. Yesterday, Sefolosha made this resounding statement to the media drawing a line in the sand:

“On advice of counsel, I hope you can appreciate that I cannot discuss the facts of the case,” Sefolosha said in his first public comments since the incident. “Those questions will be answered by my attorney in a court of law. I will simply say that I am in great pain, have experienced a significant injury and that the injury was caused by the police.”

Thabo’s lawyer, Alex Spiro, went on to state that “We are also investigating the tactics of the police in this case.â€

According to ESPN, when asked for comment, both the NYPD Deputy Commissioner of Public Information and the Internal Affairs bureau declined to comment.

The situation is far from resolved as Thabo Sefolosha, who would’ve been preparing for the NBA Playoffs as a key member of the eastern conference number one ranked Atlanta Hawks, is now preparing for what appears to be a murky legal battle, and a lengthy physical recovery.

Egypt Sherrod: We Canâ€™t Depend on Society to Teach Kids About Money

Women on Film: 5 Black Actresses Running It in Hollywood