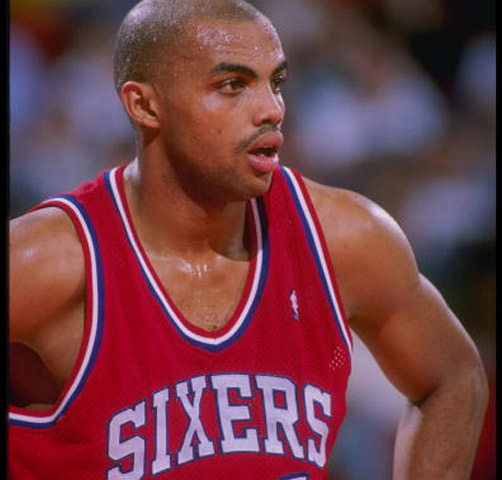 From the onset of his career Barkley was surrounded by greatness. Drafted by the Philadelphia 76ers in 1984, he joined a team that includes legends Julius Erving, Moses Malone and Maurice Cheeks. Holding his own, Sir Charles averaged 14 points and 8.6 rebounds per game during his rookie season. A year later, he was the teamâ€™s leading rebounder and second scorer before eventually becoming the Sixersâ€™ franchise player until he was traded in 1992 to the Phoenix Suns, where he continued to dominate as a rebounder and team leader. By time he retired in 2000, Barkley became the fourth player in NBA history to achieve 20,000 points, 10,000 rebounds and 4,000 assists. However, the Dream Team gold medalist was never able to win a title to compliment his accolades. By Alec Banks for HypeBeast

It was 1993 when Charles Barkley penned the infamous text for his now iconicÂ Nike commercial where he proclaimed, “I am not a role model. I’m not paid to be a role model. I’m paid to wreak havoc on the basketball court. Parents should be role models. Just because I dunk a basketball, doesn’t mean I should raise your kids.â€ Clear, succinct and thought provoking, the words still hold weight in today’s contemporary athletic landscape, but for completely different reasons.

Nearly 20 years ago athletes did as they pleased, only entering the public news scope if an off the court/field dustup was so monumental that the nightly news couldn’t affordÂ not to cover it. Today, thanks to the advancement in social media with tools like Facebook and Twitter, athletes have signed up for a 24 hour a day news conference–forgoing filters in exchange for fuel that they add to a nightly stew full of politics, scandal and pop culture oochie wally. Athletes want the ability to make millions while still being able to crack off-kilter and slightly offensive jokes without seeing the number of zeroes in their paycheck affected. Unfortunately, that’s not how it works. Athletes may not be role models, but they’re certainly digital lightning rods.

Twitter is a medium built around choosing one’s word wisely — given only 140 characters to make a group of followers laugh, cry or wax poetic over a group of words that create a brain boogaloo. But as history has shown us, it’s done more damage to an athlete’s career than it’s ever helped them stay “connectedâ€ with their fans — surely an excuse when a manager or coach asks a playerÂ why they’re even dedicating a nanosecond to social media exploits. From Rashard Mendenhall‘s unfortunate comments aboutÂ Osama bin Laden which occurred almost exactly a year ago, to former Chiefs running back Larry Johnson who was cut from the team after makingÂ inflammatory statements about then coach Todd Haley–Twitter proves that statements made regarding off-color subjects as well as more “relevantâ€ sports-related chatter are always going to lead to more controversy than resolution. Sports are played with emotion — social media shouldn’t be treated in the same way. Steelers safety Ryan Clark went so far as to say that “social media is ruining the world.â€

The Avengers Decoded: The Makings of a Marvelous Movie Franchise