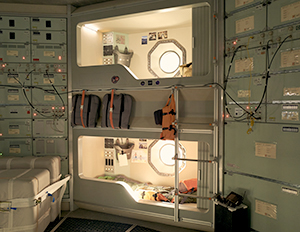 Mars. The red planet, so close to Earth, named for the Roman god of war–the planet where astronomers have sought water since I was a little girl, and may have found it.

National Geographic has produced a six-episode docudrama that tells the story of a mission to our neighboring planet, and to get the science right, consulted with experts that included Mae Jemison, an astronaut and the first African American woman to go into space.

Getting the Science Right

I spoke with Jemison, who has degrees in engineering and is also a medical doctor, about her role as adviser.

“This docudrama is about a fictionalized mission to Mars based on real information, real plans for missions to Mars,â€ Jemison says. “I helped advise around crew operations, around trips, around astronaut behavior–how do you move in space.â€

Why is it important to get the science right?

“We learn so much from images when we look at television shows,â€ Jemison says, “so why don’t we make the science right?â€ Jemison reasons that we can use the power of imagery to teach real science, though of course in an entertaining, not at all pedantic way.

Since we have the knowledge and understanding, there isn’t any reason not to make movies as accurate as possible, as with the movie Interstellar, though Jemison assures me that the relativistic physics in Interstellar was “very good,â€ but some of the other science in it was questionable.

“We learn all the time. There are kids who know every lyric to a song. Why not use this [movie] as an opportunity to impart information that’s valuable?â€

Jemison says the series itself is “really important. The casting is incredible, as is the directing.â€

The mission looks like a premier production. Oscar winners like Ron Howard and Brian Grazer are at the helm. And it sounds like a true documentary-drama in that it marries documentary filmmaking with scripted dramatic scenes–that, of course, are acted by actors, not actual astronauts. But the series includes interviews with real scientists.

It sounds provocative and looks beautiful.

Will we earthlings eventually go to Mars? I don’t know, but if we do, National Geographic’s Mars may be giving us a preview of what it will be like.

For more information and to watch trailers about this mission to Mars, go to the National Geographic website.

Win Up To $20,000 In GoDaddy’s Small Business Stories Contest

5 Traits that May Hold You Back From Career Advancement