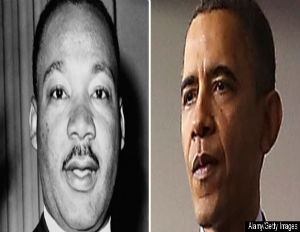 Monday, due to a once-in-a-lifetime quirk in the calendar, the nation celebrates the inauguration of the first black president to his second term on the national holiday honoring slain civil rights leader,Â  Dr. Martin Luther King, Jr.

The theme of this year’s inauguration is “Our People, Our Future,â€ and as many as 800,000 people will be in Washington for the celebration.

When President Obama isÂ sworn into office, he will use two bibles. One bibleÂ Martin Luther King Jr. owned and traveled with, and the other bible was owned by the 16th President of the United States, Abraham Lincoln, which was used during his first inaugural ceremony.

“We know our father would be deeply moved to see President Obama take the oath of office using his Bible,â€ King’s children said in a statement provided by the inaugural committee. “His traveling Bible inspired him as he fought for freedom, justice and equality, and we hope it can be a source of strength for the president as he begins his second term.â€