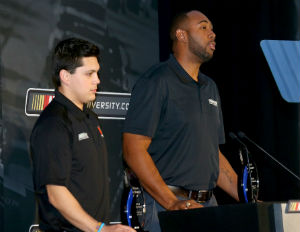 The event, which took place on February 19Â at the Daytona International Speedway, led up to the annual Daytona 500.

Driven by NASCAR Chairman and CEO Brian France, the NASCAR Diversity Awards has become the leading means to recognize multicultural accomplishments across the motorsports industry.

The winners are chosen based on participation or support of NASCAR’s year-round diversity and inclusion initiatives including: NASCAR Drive for Diversity, the leading driver and crew member development program in motorsports; the NASCAR Diversity Internship Program, a paid internship program for ethnically-diverse candidates with high academic standing from elite institutions; and the NASCAR Opinion Leader Initiative, which engages multicultural community, civic, and professional organizations.

“Becoming more diverse and inclusive is a huge priority at NASCAR and we continue to make long-term investments to boost female and minority participation across every level of our sport, on and off the track,â€ said Jim Cassidy, NASCAR senior vice president of racing operations.

“Widening our appeal is critical to our continued expansion and we are proud to honor today’s winners, and many others across the industry, for their hard work and support.â€

Diverse Driver Awardâ€¨ Winner: Abraham Calderon, 2014 NASCAR Mexico Series Championâ€¨Description: Minority or female NASCAR developmental driver who exemplifies outstanding performance, both on and off the racetrack, in encouraging awareness and interaction with NASCAR and motorsports.

Ignition Awardâ€¨ Winner: Daniel SuÃ¡rez, 2015 NASCAR XFINITY Series Sunoco Rookie of the Year, Joe Gibbs Racing and NASCAR Drive for Diversity alumâ€¨. Description: Minority or female NASCAR national series driver who demonstrates leadership both on and off the racetrack while helping to foster the diversity in sport.

Institution Awardâ€¨ Winner: National Association of Black Journalists.Â Â An organization of journalists, students, and media-related professionals that provides quality programs and services to and advocates on behalf of African American journalists worldwide. â€¨Description: Civic or educational institution that exposes minorities to motorsports and encourages pursuit of opportunities within the motorsports industry.

Young Racer Awardâ€¨ Winner: Macy Causey, 15, youngest participant in the NASCAR Drive for Diversity. â€¨Description: Minority or female between the ages of 8-15 years old who has partaken in some form of competitive racing and has overcome adversity in pursuit of his/her dream of participating in the motorsports industry.