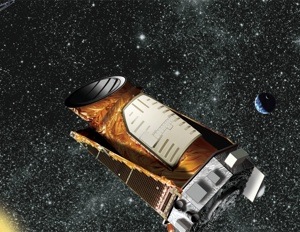 The telescope was launched in 2009 and has discovered over 900 planets.

Kepler, launched in 2009, is NASA’s telescope dedicated to searching for Earth-size planets. With this latest discovery the number of planets outside of our solar system amounts to almost 1,700. Nearly 95% of the newest batch of planets are smaller than Neptune, the eighth and last planet in our solar system, which is four times the size of Earth.

One planet in the habitable zone is twice the size of Earth, but scientists can’t verify whether there is water on the surface or if it’s a gaseous planet.

“From this study we learn planets in these multi-systems are small and their orbits are flat and circular — resembling pancakes — not your classical view of an atom,” said Jason Rowe, research scientist at the SETI Institute in Mountain View, California, and co-leader of the research. “The more we explore the more we find familiar traces of ourselves amongst the stars that remind us of home.”

The “verification by multiplicity” technique uses probability to sort through 150,000 stars and narrow the pool down to those with more than one planet candidate.

“Four years ago, Kepler began a string of announcements of first hundreds, then thousands, of planet candidates –but they were only candidate worlds,” said Jack Lissauer, planetary scientist at NASA’s Ames Research Center in California. “We’ve now developed a process to verify multiple planet candidates in bulk to deliver planets wholesale, and have used it to unveil a veritable bonanza of new worlds.”