Nas Talks About His Love For Hennessy and Venture Capital 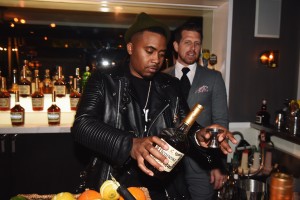 When Hennessy, the world’s #1 Cognac, launched its Wild Rabbit campaign in 2012, the brand’s executives didn’t want commercials of people at a party dancing and clinking glasses.

The whole message behind the campaign is to encourage people to pursue the limits of their potential and to, “never stop, never settle.” “The folks we have collaborated with are people who embody that. If you look at someone like Nas, it is not just that he mastered hip-hop and became what some regard as the best lyricist of all-time, but he also has branched out in many directions and is pushing his level of mastery to new and different areas.â€

Indeed, 2016 marks the 4th year in a row that the rapper, record producer, entrepreneur, and venture capitalist Nasir “Nasâ€ Jones has officially worked with Hennessy. But the relationship has been years in the making.

BlackEnterprise.com caught up with Nas to talk about his partnering with Hennessey and investing in emerging companies.

BlackEnterprise.com: How would you describe your partnership with Hennessy and working with their Wild Rabbit campaign?

Nas: I describe it as all love! I’ve been talking and rapping about Hennessy since “Illmatic.â€ In 2013, I was the face of the second year of the brand’s “Wild Rabbitâ€ campaign. In 2014 the Wild Rabbit campaign featured iconic race-car driver Malcolm Campbell — I provided the voiceover for that TV spot. This year, I’m lending my voice for the newest iteration of the campaign called “The Piccards.â€ The message behind the campaign is all about pushing the limits of one’s potential and breaking down barriers. Never stop. Never settle.Â  I believe in this message. I push my own limits every day, every moment —- in the studio, on the stage and beyond, so it’s truly a genuine fit.

We’ve been supportive of each other’s initiatives above and beyond any contractual obligations. The Hennessy team is more like my family than anything else.

Â Was there ever a time when you wanted to stop, give up?

My reasons to want to give up aren’t the same as others. Mines are more centered around the challenges of having personal privacy and just being able to enjoy my everyday life. I never felt like giving up because a task was too hard. Giving up isn’t an option. It’s that drive that I have inside of me that keeps me going. I’ve always chased my ‘Wild Rabbit’ and the journey has pushed, and still pushes me, to ‘Never stop. Never settle.’

What made you start the investment firm Queensbridge Venture Partners?

My partner and I (Anthony Saleh) wanted to institutionalize our vehicle that we invested out of, so we decided to take it a step further and raise a fund. We’ve been investing since 2010 as angel investors and since 2013 out of our own fund.

Is it true that you were trying to follow in the footsteps of investor and artist manager Troy Carter?

We did early deals with Troy. Anthony was a part at his management firm and we decided to jump on deals together, so we ended up starting around the same time. He was a great partner to work with and was a great dude to bounce ideas off of.

As an investor, what are some things that you look for in a company?

What are some turn-ons and turn-offs when entrepreneurs pitch their ideas?

What lessons have you learned as an investor that you were able to apply to your career?

Try everything. You never know what will stick.

What is the best advice you ever received about money?

What do you want to be your legacy?

I aspire to inspire people. I want my family, peers and fans to know I left my all on the stage, in the studio, wherever. They’ll know I pushed the limits of potential as far as they could go and that’s what drove me to success. I still look up to those who came before me. The legends who left an impact way beyond the world of entertainment to be truly worthy of their legacy.

That’s my Wild Rabbit and I work on my legacy every day to ensure its future.