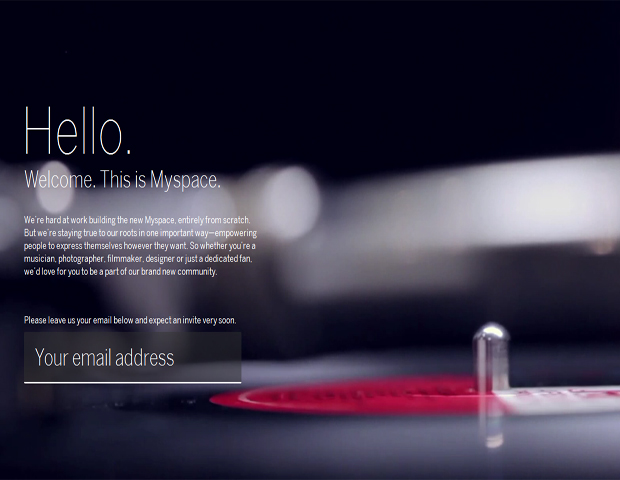 In 2003 MySpace revolutionized social media and music marketing, becoming a powerful tool for musicians and labels in the digital age. However, the site was hobbled by spam, poor design and a shift in focus during its later years, sending users flocking to other services like Facebook and Twitter. To put it quite frankly, the service became the butt of many jokes.

However, in 2011, the Los Angeles-based social network was purchased by a group of investors, including music superstar Justin Timberlake, with a goal to remake the brand in the spirit of its original mission–a hub for recording artists. But with social networks such as Facebook, Google+ and Pinterest grabbing users’ attention, how exactly would MySpace reclaim its social media title?

We found out this week, as the team unwrapped its radically designed vision for the next MySpace on Monday via a video sneak peek. With its renewed focus on music and a brilliant new layout, see how MySpace is set to revolutionize the social media landscape, again.

Visuals Take a Front Seat – Although Instagram and Pinterest have placed an emphasis on images to grab user’s attention, MySpace’s new design goes deeper, bringing visuals to the forefront. The new profile page image directs music fans’ eyes directly to the page, allowing for a striking, personalized way for fans to find a music project.

‘Friends List’ Is Back – One of the largest advantages of MySpace was the “friends listâ€ and the ubiquitous “top friendsâ€ profile page feature. The list became a true avenue of music discovery. Fans can now discover similar musicians, in addition to acts that inspire their favorite artists. Not only is the “friends listâ€ back, but it is superior to the previous design.

See Who Is Close to You With Affinity – Both Facebook and MySpace will show you how many followers and friends you may have in common, but MySpace’s Affinity Score takes it one step further, giving you a quick percentage snapshot of similar fans, organizations and recording artists. Affinity will become an easy way to seek out similar musicians for collaborations and tours.

Create Playlists On the Fly – MySpace’s easy-to-use music player became a hit with fans and artists alike. Not only can you create a playlist of your own music in this latest version, but you can access over 42 million songs in the MySpace library, opening up infinite possibilities to express your musical style.

Emphasis Placed on Stats and Analytics – As social networks evolve, statistics and analytics will play an ever increasing role in guiding potential media decisions. Unfortunately, this data has taken a backseat in many social media services (just take a look at Facebook’s aging Insights platform, which hasn’t been revamped in years).Â  MySpace’s new design will provide beautiful stats. With geo-targeted data, you can see your top fans for the week broken down by region and city. Stats will also show you your “most-influential fanâ€ creating marketing and outreach opportunities to connect with your top infuencers.

Quitting Your Job to Pursue a Lifestyle Business