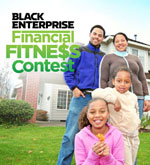 In this current economy, the only thing you can expect is the unexpected–that’s the overwhelming sentiment echoed by our 2007 Financial Fitness contest winners. Economic turmoil is touching lives. One winner lost her job of 33 years. Two others are feeling the impact of a lackluster stock market and are reconfiguring their investments. However, not all of the unexpected events were bad. Two winners were able to use the real estate market woes to their advantage. They fulfilled their homeownership goals at a discount–one sooner than expected. Each winner acted on at least some of the advice the planners offered. Despite sudden change and uncertainty, they are even more motivated to continue building upon the gains of last year to ensure a strong financial future.

It’s been a good year for the Raines Family. They have finally realized their dream of homeownership. Last August they bought a three-bedroom, two-bathroom home for $138,000 in Albany, Georgia, but it wasn’t easy. When they first began house hunting, they were told that April’s history of late credit card payments and Gabriel’s lack of credit history would make them a tough sell with lenders. Consequently, they became fastidious about paying bills in full and on time. The couple’s contest winnings went toward paying down credit card debt and old medical bills.

Before and after the home purchase, the couple got serious about generating extra income. In addition to her full-time job as a business manager at a hospital, April took on work as an online adjunct professor teaching courses in medical billing and coding, which earns her anywhere from $800 to $1,000 per five-week semester. That money helped with closing costs and other expenses.

“We are proud that we have been able to provide a home for our family and that we’re building equity,â€ says April. Now that both of their children are in school, daycare expenses have vanished. That’s been a help, but the couple is trying to find a healthy balance between continuing to pay off debt, furnishing their home, and saving.

“We haven’t been as diligent about saving as we should have,â€ says April. “When we first purchased the home, we had to focus on furnishing it. We went from a two-bedroom apartment to a 1,800-square-foot house.â€

The couple does not have as much discretionary income as they would like, but they have increased their savings for retirement. “We’ve learned valuable money lessons, and we’re more conscious of where our money is going. We’re sticking to a budget–a mortgage is a 30-year commitment,â€ says Gabriel.

The Advice: Enhance credit scores. Gabriel should open two charge accounts and pay them on time. Use $1,000 of the contest winnings to pay medical expenses. Try to negotiate a reduced amount. Once paid, get payoff letters and send them directly to credit bureaus, requesting that they record payments and clear it from April’s report.
The Action: April and Gabriel used their contest winnings to pay down their credit card and medical bills. They improved their scores