Movie Review: Southside with You 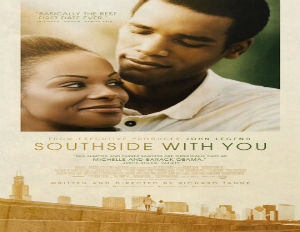 From the time I heard about Southside with You–the story of the first “dateâ€ between our beloved president and the lovely first lady Michelle Obama–I knew I wanted to see it.

I’d read Dreams from My Father and its description of the first couple’s first date. But I knew I’d love seeing it on screen.

I wasn’t disappointed. And I think you can like it without admiring the Obamas and their family life as much as I do.

First, the movie is refreshing. For those of us who remember real love stories–when people had a relationship and got to know each other instead of just jumping into bed–this movie is a delightful throwback to that time.

I was initially annoyed that the actor portraying Barack Obama is so much darker than the president. When black people are portrayed on screen, skin tone isn’t always considered. For example, Sidney Poitier was cast as Associate Justice Thurgood Marshall–need I say more? Not all black people look alike, but casting directors don’t seem to notice that.

But Parker Sawyers’s portrayal almost immediately allayed my concerns. His manner, speech, even facial expressions were so convincing that by the end of the movie he seemed to be Barack Obama. He absolutely nailed it. He exuded the president’s sweetness, charm, intelligence, confidence, earnestness–and just a bit of helplessness, since he wasn’t completely sure if he was reeling Michelle in or not.

I didn’t like how Barack (Sawyers) kept licking his lips and looking over Michelle’s (Tika Sumpter’s) body. It was unnecessary, I thought.

I also thought the scene where Michelle isÂ dancing with a little girl was unrealistic. Most women out with a man for the first time don’t want to get hot and sweaty and wrinkled. Of course, this is a movie, so Michelle still looked neat afterwards–but I’m not sure how that would have worked in real life.

I loved this first date, I mean, non-date. Michelle keeps insisting it’s not a date, because she thinks it’s inappropriate to date a junior associate at the law firm where they both work. She’s also the only black woman at the firm, so she wants to hold herself to an impeccable standard.

Michelle’s resistance aside, Barack planned a wonderful day, though he wasn’t exactly forthcoming about it. He had invited her to attend a meeting of community organizers–but, oh, let’s go to the museum first, and then the park–and after the meeting let’s walk by the lake, see a movie, and get something to eat, not to mention ice cream for dessert.

It’s hinted at, even from the beginning when Michelle is home preparing, that she’s attracted to the young associate, but she’s not letting on. She wants to keep it professional–and she definitely strives to. But at the end it’s clear that Barack has made as much of an impression on her as she has on him.

This is a great movie for romantics or those who admire the Obamas and have wondered what their budding romance may have looked like. I love slow, thoughtful movies, but even for me this film is a little slow. In its simplicity and honesty, though, I’d say the movie depicts the beginnings of the Obama love story just right. You also see a few hints of the great man and leader Barack Obama will be.

City Eats: Take a Bite Out of the Big Apple

How to Get a Small Business Loan With Bad Credit