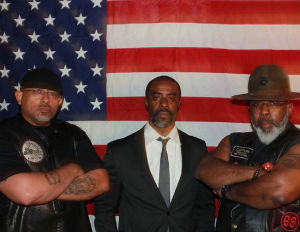 There’s perhaps a surprising connection between bikers and soldiers. In honor of the bond, for the fourth consecutive year, a New York motorcycle club hosted a fundraiser Saturday to support U.S. troops serving abroad and honor soldiers in their community.

On the eve of Veterans Day, Denise Chevere hurried around a Bronx nightclub, briefing volunteers and arranging items, in preparation for the Clutch Divaz MC 4th Annual Troops Fundraiser. Chevere is the founder of the small motorcycle club, creator of the fundraiser and practically the engine behind its execution. She says her inspiration for the event came from a conversation with her father, who served as a sniper during the Korean War.

“A few years ago, I asked him what the hardest thing about serving was,â€ says Chevere. “He said it’s that people assume when you’re away that you have everything you need. Of course the military provides but it’s hard because without the other things, especially connection to your family and community, you feel like everyone’s forgotten you.â€

To be sure that no soldier is forgotten, Chevere began an effort to reach out to troops serving in Iraq and Afghanistan. Doing research she found reports on troops needing everything from stationary to write home to playing cards in downtime. She found the Adopt A Platoon organization online right away and just as quickly made the connection between the riding community and the military.

Biker Andre “Gunzâ€ Greene presented awards at Saturday’s packed event, which was organized to raise money for the more than 120 care packages the Clutch Divaz send every year. As a member of the Savage Skulls Motorcycle Club and veteran of the U.S. Marine Corps., Greene says it’s a sense of belonging that binds soldiers and riders.

“The connection is brotherhood,â€ says Greene. “One thing that happens in the motorcycle community is that it gives, often retired members of the military, a chance to ride together and relate to one another. It’s something that’s missing elsewhere in society.â€

Most Ridiculous Reality TV Moments of 2012