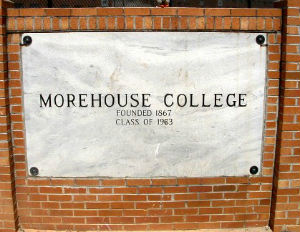 A Morehouse College student was shot and killed inside his car on Thursday night.

Joseph Gibbs, 23, of Atlanta, died near the intersection of Parsons and Webster streets, according to police. A passenger in the car, whose name was not released, was shot in the hand.

The suspect fired multiple times into the victim’s vehicle before absconding in a separate car. Additional details are being withheld to protect the “integrity of the investigation,â€ the police said.